the two faces of America 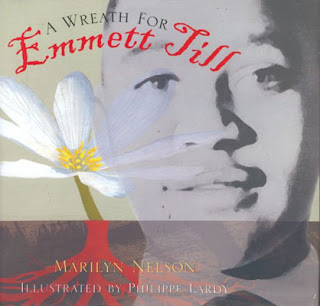 As Marilyn Nelson explains in the foreword to A Wreath for Emmett Till (2005), her book-length poem is a heroic crown of sonnets, "a sequence of fifteen interlinked sonnets, in which the last one is made up of the first lines of the preceding fourteen."

Till, a 14-year-old Chicago boy, was visiting relatives in Mississippi in the summer of 1955 when he was kidnapped and murdered by two white men for supposedly whistling at a white woman. His mother held an open-casket funeral so the public could see how her child was mutilated by these men, who were charged with the murder but ultimately acquitted after a trial by an all-white jury.

Nevertheless, the battle for civil rights in the Deep South had begun.

Nelson's words pack a punch, especially in the following sonnet:

Trillium, apple blossoms, Queen Anne's lace,
woven with oak twigs, for sincerity ...
Thousands of oak trees around this country
groaned with the weight of men slain for their race,
their murderers acquitted in almost every case.
One night five black men died on the same tree,
with toeless feet, in this Land of the Free.
This country we love has a Janus face:
One mouth speaks with forked tongue, the other reads
the Constitution. My country, 'tis of both
thy nightmare history and thy grand dream,
thy centuries of good and evil deeds,
I sing. Thy fruited plain, thy undergrowth
of mandrake, which flowers white as moonbeams.

Young readers who stick with A Wreath for Emmett Till through Nelson's various twists and turns of phrase will be rewarded with an experience that bears comparison to a fiery gospel sermon delivered by a preacher whose heart is filled with equal parts rage and forgiveness. (Philippe Lardy's artwork is pretty, but the pen is mightier than the brush here.)

Not easily forgotten.
Posted at 10:25 AM

Email ThisBlogThis!Share to TwitterShare to FacebookShare to Pinterest
Labels: Emmett Till, Marilyn Nelson, tweens and teens, YA literature