I've now heard the Ramones' 1978 song "I Wanna Be Sedated" twice while shopping for groceries. Usually you're being sedated in supermarkets with soft rock (which is fine by me, of course), but now the Ramones do the trick just as well, apparently.
Posted at 10:36 AM No comments:

Last spring I was hired by Rhino Records to write a series of brief artist biographies for its website. Without a doubt it was the best freelance job I've ever had, but some of the bios weren't used, so in the spirit of not letting good research go to waste, I now present each one in its unedited entirety, starting with Pantera.*

Check back next month for a new entry, and in the meantime visit Rhino.com for the best collection of music on this planet or any other! (Admittedly, I'm trying to stay on the label's good side, but since I've been buying their CDs since the early '90s and still own a Rhino catalog I sent away for in January of '97, I hope it's obvious that I'm not just blowing smoke.)

* After I turned in the first three entries I was asked to not mention death, drugs, or depositions if at all possible in subsequent write-ups, so "unedited" became a relative term.

Though Pantera's first four albums found them emulating the glam-metal stylings of their heroes, Kiss and Van Halen, by 1990 they'd reinvented themselves as the kings of groove metal on their major-label debut, Cowboys From Hell. When Far Beyond Driven debuted at the top of Billboard's album chart four years later, their status as the biggest band in heavy metal was all but confirmed.

Formed in Arlington, Texas, in the early '80s by brothers Darrell and Vincent Abbott, better known as "Diamond" Darrell (guitar) and Vinnie Paul (drums), Pantera was rounded out by singer Terry Glaze and bassist Rex Brown for the band's first three albums, the independently released Metal Magic (1983), Projects in the Jungle (1984), and I Am the Night (1985). Once Glaze quit, it paved the way for singer Phil Anselmo to join in '87 and Pantera's classic lineup to jell over the next decade.

After Anselmo's initiation into the group on 1988's Power Metal, the boys ditched the spandex and the Aqua Net and stopped trying to beat Mötley Crüe at their own game. Signing with Atco Records in '89, Pantera released Cowboys From Hell the following year and never looked back. (In fact they've disowned their first four discs, all of which are out of print.) 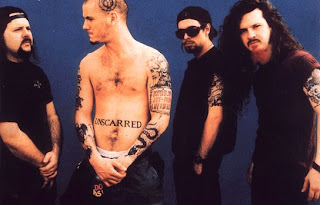 The band's punishing new sound, stripped down to allow for maximum aural assault, featured militant riffs and bluesy solos from Darrell's guitar, a percussion style that earned Vinnie Paul the nickname "the Brick Wall," and guttural growls and barks that made some listeners question Anselmo's mental health. Vulgar Display of Power, their 1992 follow-up, went even further, providing proof of the art of noise on tracks like "Mouth for War" and "Walk."

By the time Far Beyond Driven debuted at number one in 1994, Darrell had changed his nickname from "Diamond" to "Dimebag," signaling that Pantera was by the metalheads, for the metalheads, even if they were now making platinum records.

After Driven the band explored side projects, with Darrell appearing on Anthrax's Stomp 442 (1995) and Anselmo forming the metal supergroup Down. Pantera reconvened for 1996's The Great Southern Trendkill, which showed off a more subdued side of the band on songs like "Suicide Note Pt. I," but because of tensions between Anselmo and the Abbott brothers, the singer recorded his vocals in one studio while the rest of the band laid down their tracks in another.

Official Live: 101 Proof followed in '97 once Atco realized a new studio album wasn't forthcoming. Indeed, it wasn't until two years later that Pantera put aside the side projects—Eibon and Viking Crown for Anselmo, the David Allan Coe collaboration Rebel Meets Rebel for the Abbotts and Brown—long enough to record Reinventing the Steel (2000), which turned out to be their final album. Realizing the communication breakdown between Anselmo and themselves was beyond repair, Darrell and Vinnie Paul announced Pantera's breakup in 2003.

Any hopes of a reunion were crushed a year later when the Abbott brothers' new band, Damageplan, performed in Columbus, Ohio, on December 8, 2004. Shortly after the band began playing, a disturbed fan named Nathan Gale jumped onstage and shot Darrell at close range, killing him and three others before being fatally shot by a police officer.
Posted at 3:47 PM No comments: 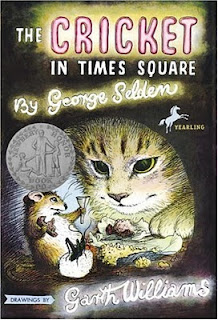 My favorite books for kids are those that start out naturalistically and then go quietly, gently off the rails. "Charlotte's Web" is a perfect example: E.B. White's descriptions of New England farm life are so precise, so deftly rendered, that it seems entirely believable when the animals start talking and Charlotte begins to spell out words in her web.

This, of course, is one of the wonders of children's literature, its sense of the world as mysterious, even magical, its recognition that there is much in daily life beyond our reach. At its best, childhood is like that also, although more often, it can be a landscape of arbitrary rules and inexplicable adult tension, in which too much happens (literally and figuratively) above our heads.
Posted at 5:24 PM No comments:

When I was in North Carolina for Christmas, my parents and I went to see Little Fockers, partly because nothing else was playing at the local one-screen theater that day. The movie's set in Chicago, and there's a scene in which Robert De Niro's character is stalking his son-in-law, played by Ben Stiller, on the el, but before he gets on the train he sticks a magazine between the doors to keep them from closing.

I was pretty sure the magazine was an issue of StreetWise, probably from the fall of 2009, when Little Fockers was being filmed at the Sheridan el stop in Chicago's Wrigleyville neighborhood. I worked as a volunteer proofreader for StreetWise from March 2009 to June of last year, so I let Ben Cook, the magazine's production manager, know about the "product placement" in the movie. He replied:


I’m glad you caught that! About a year ago the prop guy for that movie came and got a bunch of issues from us, but we kind of figured that it wouldn’t be in the movie, or if it was it would be under 30 other magazines in the background behind an extra’s big head ... something like that. Now I have to see the movie that I never would have seen otherwise, just so I can see Robert De Niro holding something you and I worked on. How weird and amazing!