I'm semi-ashamed of my museum shaming.

"[Ronald Shusett] originally conceived [Total Recall], which is based on Philip K. Dick's short story, 'We Can Remember It for You Wholesale,' a year before writing Alien with Dan O'Bannon. It was a script so powerful that it became legendary, so ambitious it was for years considered unfilmable. Yet it was nearly shot several times, with Patrick Swayze, Christopher Reeve, even with Arnold Schwarzenegger under Dino De Laurentiis. Powerhouse directors like David Cronenbrerg and Bruce Beresford have come and gone, each leaving their imprint on the script's development."

—Will Murray, "Postcards from Mars," Starlog magazine, May 1990

It turns out that the Art Institute of Chicago placard that stated that Gretchen Bender's 1987 work is "named after the Paul Verhoeven film" isn't inaccurate, but it's still confusing, because Verhoeven wasn't hired to direct Total Recall until the year after Bender's work premiered ("named before the Paul Verhoeven film" would probably have only made things more confusing). According to Art in America magazine, "Bender's work was completed and made public before the director's 1990 Hollywood blockbuster, which the artist read production notices about in movie industry trade papers and from which she cribbed the title." 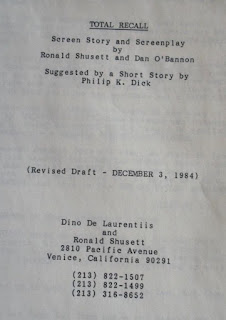 However, from what I found online, Bruce Beresford was attached to direct Total Recall throughout 1987, but producer Dino De Laurentiis's financing kept falling through. (Beresford then directed Her Alibi and Driving Miss Daisy, both released in '89, in quick succession.) David Cronenberg took the job after Beresford quit, but he soon bowed out as well, and then Arnold Schwarzenegger, who first read the film's script while making Commando (1985), convinced Verhoeven to do it.

Want to be more confused? Allow Red Bull Arts to pour you its version of the story:

"Although her work debuted three years ahead of the movie’s release, Bender's title comes from the Paul Verhoeven film Total Recall (1984), which is based on the Philip K. Dick short story 'We Can Remember It for You Wholesale.'"

So, if you want to forget how time and math work and subtract three years instead of adding three, drink Red Bull.

Remembering things, wholesale or otherwise, can be a tricky business.
Posted at 4:40 PM No comments: