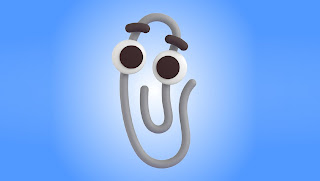 "Microsoft is bringing Clippy back to Microsoft Teams," reports Vox Media, "after first resurrecting the annoying paperclip two years ago and then killing it off after a few days."
So, next Easter, when your preacher declares that Christ the Lord is risen again, be sure to shout, "Hey, just like Clippy!"
Posted at 12:05 PM No comments:

I noticed recently that someone I briefly knew 20 years ago calls himself an "Emmy-winning writer" on his website. But his Emmy—a local Emmy, from what I can tell—is for a children's TV show produced somewhere in the midwest.
That's why I now demand that everyone refer to me as an Ermy-winning writer.

What's an Ermy, you ask?

An award you don't have, obviously.
I'm actually an EGOD winner: Ermy, Granny, Ozkar, and Dony. Yep, just me, Mike Nickels, Marvin Hamlet, Audrey Heartburn, Pat Morita Moreno, and a few awe-inspiring others.
I'm in good fictional company.
Posted at 11:11 AM No comments:

Where do broken tweets go?

When Twitter permanently suspended President Trump's account on Friday, January 8, many people's "quote tweets," including mine, were suddenly devoid of context.
There are no words for such a tragedy.
But thanks to the Trump Twitter Archive, context has been restored, allowing me to waste precious hours of my life transferring roughly six dozen of the soon-to-be-ex-president's tweets, and my responses to those tweets, to this blog.
Let the record show that no one will ever request access to this record. Nevertheless ...
····················
Nov 15, 2016 · 9:55 PM EST
Very organized process taking place as I decide on Cabinet and many other positions. I am the only one who knows who the finalists are! 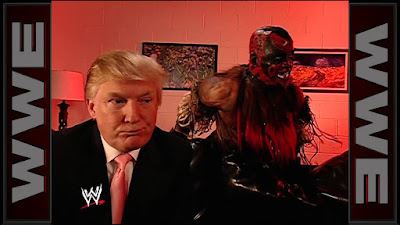 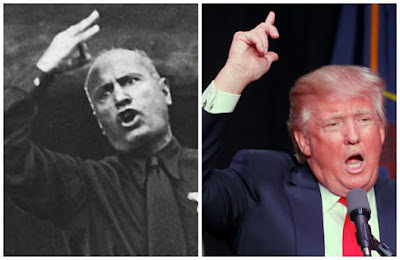 Jan 17, 2017 · 8:05 AM EST
People are pouring into Washington in record numbers. Bikers for Trump are on their way. It will be a great Thursday, Friday and Saturday!

Jan 17, 2017 · 10:02 AM CST
Good to know that the Four Horsemen of the Apocalypse have finally made the switch to motorcycles. Progress!

Jan 30, 2017 · 9:22 AM CST
Merriam-Webster defines projection as "the attribution of one's own ideas, feelings, or attitudes to other people or to objects."

Feb 4, 2017 · 8:55 AM CST
"The Celebrity Apprentice," now hosted by Schwarzenegger, wouldn't exist if the original "Apprentice's" ratings hadn't fallen a decade ago.

Feb 4, 2017 · 8:12 AM EST
The opinion of this so-called judge, which essentially takes law-enforcement away from our country, is ridiculous and will be overturned!

Feb 4, 2017 · 11:15 PM CST
We opened up our country to someone without our best interests at heart last November, and ever since many of us have been terrified.

Feb 13, 2017 · 10:47 PM CST
Love these congratulatory banners for your Cabinet picks! Are you available for children's birthday parties? No? What about Michael Flynn?

Feb 15, 2017 · 12:52 PM CST
"And why is the failing @nytimes considered the world's greatest newspaper? Was there a vote? Did millions vote illegally? I want answers." 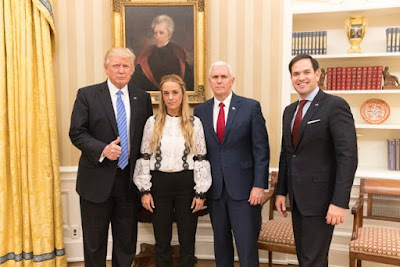 Feb 16, 2017 · 7:14 AM CST
You and Vice President Pence look like you just apprehended Ms. Tintori. She's Venezuelan, not Mexican, guys. Calm down.

Feb 18, 2017 · 3:03 PM CST
Do you and Rush ever have sleepovers and stay up all night debating which of you is the least racist, least anti-Semitic person you know?

Mar 6, 2017 · 9:40 PM CST
I agree! A new iPhone designed by a reanimated Steve Jobs would distract the country from your presidency for several minutes, "the Donald."

Mar 13, 2017 · 2:40 PM CST
I certainly wouldn't be able to keep a straight face while parroting your lies to millions of viewers. Better you than me, Sean et al.!

Mar 15, 2017 · 10:03 PM CST
If everything (e.g., Snoop, Schwarzenegger, non-right-wing newspapers and cable-news networks) is failing, is anything failing?

Mar 20, 2017 · 6:49 AM EST
The Democrats made up and pushed the Russian story as an excuse for running a terrible campaign. Big advantage in Electoral College & lost!

May 5, 2017 · 11:53 AM CST
"Next month we celebrate the end of the non-American Asian nation of North Korea. Remember, nothing lasts forever except the next 4 years."

Jun 2, 2017 · 10:30 AM CST
Of course you care about the environment — no U.S. president has been more full of fertilizer or more willing to spread it around the globe.

Jun 30, 2017 · 12:37 PM CST
Thanks to you, the show's already high ratings were even higher today. For an example of a low rating, click here: https://projects.fivethirtyeight.com/trump-approval-ratings/….

Aug 17, 2017 · 2:45 PM EST
Study what General Pershing of the United States did to terrorists when caught. There was no more Radical Islamic Terror for 35 years!

Apr 13, 2018 · 1:45 PM CST
Weren't those Russian prostitutes proven leakers five years ago? I don't see you condemning them. (If they told you, "Camera add 20 pounds to your manly physique, Mr. 'Apprentice,'" then they're proven liars too.)

····················
Jun 26, 2018 · 8:17 AM EST
A Harley-Davidson should never be built in another country-never! Their employees and customers are already very angry at them. If they move, watch, it will be the beginning of the end - they surrendered, they quit! The Aura will be gone and they will be taxed like never before!

Jun 26, 2018 · 12:53 PM CST
This 1984 Serge Gainsbourg song is probably the closest you're going to get to agreeing with the French on something: https://www.youtube.com/watch?v=sc6tt9vkHEY.

adult children who should neither be seen nor heard

Any first graders out there who know the difference between "then" and "than"? If you do, then you're one step ahead of Donald Trump Jr.

And do you know that DJT2: SOB has accused his father's competition for (the) president, former Vice President Joe Biden, of being a pedophile? Yet here he is on Twitter, casually mentioning that he knows first graders.

As children tend to say, he who smelt it dealt it.

(One of Trump Jr.'s daughters is currently in first grade, I believe. If she's running for class president, I guess it's sweet that daddy dearest is offering her free campaign advice, but did she ever think to ask if Karl Rove is available?)
Posted at 5:18 PM No comments:

One of my favorite movie moments arrives in the first act of Sydney Pollack's Three Days of the Condor, when Max von Sydow's assassin, Joubert, is leading the massacre of Joe Turner's (Robert Redford) CIA colleagues. The last one still standing, Janice (Tina Chen), is asked, gently, by Joubert to move away from the windows.
"I won't scream," she says.
"I know," he replies, and von Sydow delivers the line in an almost paternal way. Nothing personal—just business.
Joubert is one of the most memorable "bad guys" in any movie I've seen, and although Pollack's go-to script doctor, David Rayfiel, gives him some great dialogue, von Sydow is the reason why Joubert becomes the most three-dimensional character in the film. He steals Three Days of the Condor from his top-billed costars in the most gentlemanly fashion possible.
Posted at 9:16 PM No comments:

"We're artists, so we understand."

Posted earlier today on The Hollywood Reporter's website:
To promote her new memoir, Inside Out, Demi Moore sat down with Diane Sawyer in an interview that will roll out in multiple parts this week on ABC's Good Morning America. During Tuesday's second installment, Moore, 56, opened up about her split from ex-husband Ashton Kutcher, 41, which she described as "devastating."

Among other revelations, the actress shared that she discovered Kutcher was "caught cheating" from a Google Alert on her cellphone. San Diego-based administrative assistant Sara Leal shared intimate details of her interactions with Kutcher, which took place in 2011 during the actor's marriage to Moore, in an interview with Us Weekly. (Kutcher and Moore wed in 2005 and finalized their divorce in 2013.)

Moore told Sawyer that she immediately called Kutcher and "asked if it was true." Moore went on to say that Kutcher "admitted it right away." She recounted, "And I think my response was, 'Are you fucking kidding me?' That was it. And I think I could barely take a breath" ...
Published on January 16, 2011, in the Chicago Sun-Times:

Demi Moore is a string that's most definitely attached. She is the one on her husband Ashton Kutcher's mind when he does a sex scene in a movie ... 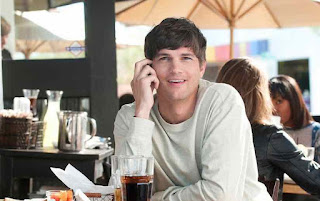 "You know, I really think that whomever you're with as a partner does need to be your friend, too," Kutcher says. "All the really successful, happy relationships I know of feature two people who are together as friends, too. I don't know if sex always has to have feelings, but friendship always does. If you're friends, you will have feelings of some sort" ...
"There is so much that's not said about sex in our country," he says. "I do a lot of work on human trafficking. I connect with girls who end up in this trade partially because of lack of education about sex" ...

Kutcher says that there is no issue with his actress wife when it comes to onscreen romance with others.
"We're artists, so we understand," he says.
But when it comes to offscreen romance with others, Moore should've realized that sex doesn't always have to have feelings, and neither do husbands, who may be reserving all of their feelings for girls they connect with who need to be educated about sex.

Do 22-year-old administrative assistants count, even if you have sex with them on the sixth anniversary of your wedding to Demi Moore (according to the administrative assistant in question, who, unfortunately for Kutcher, didn't leave much unsaid about sex when speaking to Us Weekly)? Sara Leal is a human, after all, who probably had to fight San Diego traffic on occasion in order to get to work on time.

The syndicated Sun-Times puff piece quoted above centered on No Strings Attached, a romantic comedy pairing Kutcher and Natalie Portman as friends with benefits. It debuted in theaters six months before Friends With Benefits, starring Justin Timberlake and Mila Kunis, and eight months before Kutcher demonstrated how much he valued his friendship with his wife by immediately confessing that he'd connected with a human who's sat in traffic.

No Strings Attached earned $70 million at the domestic box office, about $15 million more than Friends With Benefits, but the latter won the international race in a photo finish with a total of $149.5 million, about $300,000 more than the former. And Kutcher began dating Kunis, his former That '70s Show costar, the following year — they got married in 2015 — because listening to non-celebrity humans complain about traffic gets old real fast.
That's one benefit you should give exclusively to friends.
Posted at 9:58 PM No comments:

When a woman gets in trouble, everybody throws her down
Lookin' for her good friend, none can be found
You'd better come on in my kitchen
Baby, it's going to be rainin' outdoors

But now my kitchen's full of people I've never seen before
You say you met them online to talk about amour
And now they're takin' their clothes off, they're startin' to sweat
It ain't rainin' in my kitchen, but the floor sho' is wet
Posted at 11:35 AM No comments: