An Associated Press story about Katey Sagal (Married ... With Children, Futurama, 8 Simple Rules) and her role on the FX series Sons of Anarchy was reprinted in yesterday's Chicago Sun-Times. I have no idea when the word "not" got deleted from the following paragraph, but I like the result:
Season 2 of the FX drama "Sons of Anarchy" is primed to end with bloody payback. It's likely to be pretty.
Posted at 3:33 PM No comments: 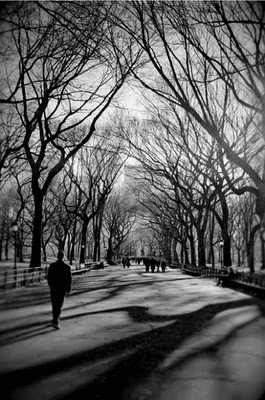 On the run from government assassins after a botched attempt on his life, and looking for a place to hide, CIA bookworm Joe Turner (Robert Redford) kidnaps a stranger, Kathy Hale (Faye Dunaway), and forces her to drive him back to her place, in Sydney Pollack's 1975 film Three Days of the Condor.

Later, at Kathy's apartment, Joe uses a rare moment of quiet to look at the black-and-white photographs on her walls.

Joe: Lonely pictures.
Kathy: So?
Joe: You're funny. You take pictures of empty streets, and trees with no leaves on them.
Kathy: It's winter.
Joe: Not quite winter. They look like ... November. Not autumn, not winter. In between.

Alessandra Stanley wrote an article in the New York Times earlier this year about Jimmy Fallon taking over for Conan O'Brien on NBC's Late Night that month, and O'Brien getting set to take over for Jay Leno on The Tonight Show in June, and Leno taking over for the majority of 10 PM drama series on the network in the fall, and how every other late-night network talk-show host is a white guy in a suit, and why isn't there any diversity? 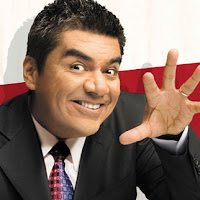 When The Arsenio Hall Show started its syndication run in January 1989, it garnered a lot of media attention, mainly because its host was the only minority hosting such a show at the time. But it also had much more of a party atmosphere than Johnny Carson and David Letterman's shows on NBC: Hall didn't sit behind a desk when interviewing his guests, he featured many R&B and hip-hop musical acts who weren't getting booked on the NBC shows, and he had a section of audience members he referred to as "the dog pound" because they responded "Woof, woof, woof!" when commanded to do so. (Sadly, Ivan Pavlov's late-night talk show never got off the ground in the late 1800s due to TV not having been invented yet.)

Yo! MTV Raps debuted a few months before Arsenio and helped bring hip-hop into the musical mainstream by exposing white suburban youth (including myself) to the relatively new genre. But 20 years ago MTV was a cable channel that was still expanding its own audience, whereas Arsenio was mostly syndicated on non-NBC network affiliates on "free TV," so its exposure of hip-hop to mainstream audiences helped rap expand even further, and possibly faster, into white America. And similar to The Cosby Show five years earlier, Arsenio didn't need a white sidekick in order for its host to cross over to white audiences. It was broadcasting without the stench of narrow-minded focus-group research or "niche audience" goals.

One problem, though—Hall wasn't funny. I loved Letterman's on-air persona and Late Night's conceptual humor (courtesy of writers like George Meyer, who's something of a legend among his fellow writers on The Simpsons, and Chris Elliott, who later cocreated and starred in his own conceptual-humor masterpiece, the early-'90s sitcom Get a Life) when I was growing up, and reruns of Carson's Comedy Classics prove that the late Tonight Show host's comic timing has stood the test of time, even if ABSCAM references haven't. Hall, on the other hand, laughed at everything he said, which made his jokes even less funny. On top of that, he was a lousy listener during interviews.

I remember Hall's cameo in Eddie Murphy's directorial debut, Harlem Nights (1989), being the only funny thing in that horrible film (Murphy hasn't directed a movie since), but unlike Murphy, Hall didn't have effortless charisma as a performer telling jokes to an audience. (He recently returned to movie acting with a role in the blaxploitation spoof Black Dynamite.) His show was a party, but nothing more.

Similarly, I think any actress who's lost an award to Tina Fey since 2006 has every right to roll her eyes and gnash her teeth. (Jimmy Fallon and she continued the irritating trend of laughing at one's own jokes when they anchored Saturday Night Live's "Weekend Update" segment in the first half of this decade, though they preferred the self-satisfied smirk above all else.) To her credit, Fey has admitted she's more comfortable as a writer than as an actor, and I'm not saying she's the worst actress on TV by any means, but the fawning admiration this woman gets for her acting is ridiculous. Hollywood and all of my friends have been brainwashed, and it doesn't look like they'll come out of their trance anytime soon.

At least I can take comfort in Nancy Franklin's review of 30 Rock in the December 8, 2008, issue of The New Yorker, where she wrote, "Fey's Liz has become a bit looser over the show's forty episodes, and it may be that winning two Emmys in a row for Best Actress in a Comedy has freed Fey up as a performer; in which case, I'm all for giving out awards before people fully deserve them. (Yoo-hoo, Pulitzer Prize committee, over here!)" Likewise, Franklin can take comfort in knowing that I flattered her by unknowingly stealing that Pulitzer joke of hers last month over at Popdose.

In Fey's defense I'd assumed ever since 30 Rock began in '06 that as the creator and executive producer of the show she was responsible for all the low-cut tops her character, Liz Lemon, wears, even though Liz is a self-described awkward nerd, both socially and sexually. But if that's the case, wouldn't she cover up her breasts in the workplace? I don't think there's a subtle, multilayered joke I'm not getting here. 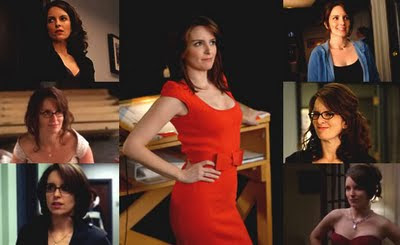 It turns out 30 Rock costar Alec Baldwin is responsible, at least according to Maureen Dowd's Vanity Fair article about Fey in the magazine's January 2009 issue. "There is Liz Lemon and there is Liz Lemon as portrayed by a leading actress in a TV show," Baldwin said. "It's not a documentary. Tina's a beautiful girl ... Tina always played the cute, nerdy girl. Tina on ['Weekend Update'], the glasses. There was not a big glamour quotient for her. Now there is." So Baldwin wants to exploit Fey even if it doesn't fit her character, which in turn makes the jokes less honest and the show less interesting. But I'm not an Emmy voter, so what do I know?

Getting back to actual late-night programming, instead of the fictional kind portrayed on 30 Rock, right before Jay Leno took over The Tonight Show from Johnny Carson in the spring of '92, Hall told Entertainment Weekly, "No one put the late-night silver spoon in my mouth. I earned every drop of mine. And I'm gonna treat him like we treated the kid on the high school basketball team who was the coach's son. He was there because he was anointed too. We tried to kick his ass, and that's what I'm going to do—kick Jay's ass."

Hall didn't seem to appreciate Leno telling the press they were "friends." Branford Marsalis didn't look like he wanted to spend any more time than was necessary with Leno when he was The Tonight Show's bandleader, and George Lopez called him "two-faced" in 2007. Then there are the stories about how David Letterman, a former friend, can't stand Leno now. (But he seems so nice. Is it a case of Leno not having any sincerity to back it up?)

Well, Hall didn't kick Leno's ass. In fact, two years after he laid down the gauntlet, his show was gone, due in part to CBS affiliates dropping his show for Late Show With David Letterman once it began airing on the network at 11:30 PM in the fall of '93. "Too much too soon" and a shift in the zeitgeist also factored into the decline of The Arsenio Hall Show's popularity. 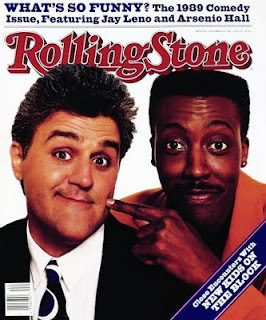 I don't think Hall got much respect from fellow comedians in the early '90s the way Letterman and Carson did. Below is part of a Bill Hicks interview from a 1992 issue of The Nose magazine in which the revered stand-up comic tells interviewer Jack Boulware how he really feels about Hall.

(Hicks died in 1994, three months before Arsenio ended its run. Hall can be consoled by the fact that Hicks also had a beef with Leno, who he once considered a mentor of sorts, because he appeared in TV commercials for Doritos; in his stand-up act, Hicks pondered whether Dallas's Patrick Duffy or Blossom's Joey Lawrence would be the celebrity to push Leno over the edge and force him to shoot himself in the head on national television, regretting what his life had become.)

You really piss people off sometimes.

Well, it's funny, but I just have this weird theory. The best kind of comedy, to me, is when you make people laugh at things they've never laughed at, and also take a light into the darkened corners of people's minds and exposing them to the light.

Man, I don't know—I always felt that's what the point of it all was. I don't think it makes you sympathetic to mass murderers so much as maybe ... I thought the whole point of it was to make you feel un-alone. Many thoughts I do have are not my own thoughts, you know what I mean? They're not secret thoughts.

In your act, why do you refer to Dick Clark as the Antichrist?

The only point of that whole thing is just about mediocrity and lowering the standards of the world.

Who else falls into that category?

(pause) Arsenio is the most dangerous one of all. Everyone is going on that show. It is the most amazing thing I've ever seen. Jesus is gonna do that show when he comes back. (as Arsenio's announcer) "Tonight on Arsenio: Paula Abdul, Della Reese, and Jesus of Nazareth. Let's get busy!" (as Hall) "Jesus, tell me the truth now. Mary Magdalene—didja do her?" (as the audience) "Arf, arf, arf, arf." (as Hall again) "We'll be right back."

I can't believe it. I mean, Robert Duvall—I've never seen him do an interview, never seen him do a talk show. Comes out to promote what? Days of Thunder. I'm watchin' him with fuckin' Tom Cruise, and [he's] just, "Tom Cruise. I had to work with this man. Oooh. Well, let me tell you something, Arsenio—Tom Cruise is the young talent of today. Better make sure of it."

What the fuck is happening? Did they all get transfusions from Merv Griffin in the green room? This is fuckin' Duvall, man! De Niro did Arsenio! Do we have some sort of huge white guilt or something? Or do these people—did they all just drink Merv Griffin's blood in some alley? What the fuck is going on here? The guy is the child of fuckin' Merv Griffin and Little Richard, man.