Play ball! (Or just read about an animated, scripted version of it.)

The following is (most of) an excerpt from longtime Simpsons writer Mike Reiss's book, Springfield Confidential, a Christmas gift from my dad, about the show's 1992 episode "Homer at the Bat": 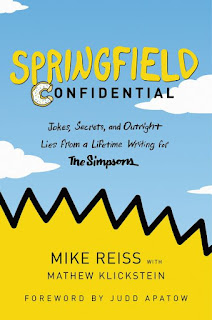 Everyone on staff loved sports ... except me. But I served a purpose—I represented everyone's wives and mothers in the audience. I'd be the lone voice saying, "Will everyone get this joke about Mordecai 'Three Finger' Brown?" Yes, I was the Staff Girl.

... We cast nine real-life baseball players (only Rickey Henderson and Ryne Sandberg turned us down), and [Simpsons writer John] Swartzwelder created quick, crazy stories for each of them:

* Ozzie Smith visits the Springfield Mystery Spot and plunges into a bottomless pit.
* Roger Clemens gets hypnotized and thinks he's a chicken.
* Wade Boggs gets into a fistfight over who was a better British prime minister, Lord Palmerston or Pitt the Elder.
* Ken Griffey Jr. overdoses on nerve tonic and gets gigantism. (Is that even a thing?)
* José Canseco does something nice for someone. (This one really stretched credibility.)

... It was a very different Simpsons episode, including the fact that the Simpsons are barely in it. Here, the guest stars were running the asylum.

Needless to say, our cast didn't like the show. Our table reading of the script bombed utterly. Two of our actors complained about the script, the only time this has ever happened.

The baseball players were much easier to deal with. Don Mattingly had the only gripe: his character makes his first appearance wearing an apron and washing dishes. "Do I have to do this?" he moaned.

"I'm sorry, it's in the script, it can't be changed," [Reiss’s then co-head writer] Al Jean lied.

The players were surprisingly good actors. Mike Scioscia could be a real professional; in voice acting, you never know who's going to have the gift.

... And then there was Ken Griffey Jr. He got angry because he didn't understand his line "There's a party in my mouth and everyone's invited." (If he had understood it, he'd have been really angry.) Adding to the pressure, his father, Ken Griffey Sr., was there trying to coach him through the line, and it wasn't helping.

The room was going to implode, so that's when they called in me, the Staff Girl. Since I didn't really know who Griffey was, they figured I wouldn't be intimidated by him. Al shoved me into the tiny recording booth. This instantly became my new worst fear: to be locked in a small glass booth with a large angry man; and I couldn't get out until I made him say a vaguely homoerotic line.

It took a few takes, but we got the line. Decades later, Griffey appeared in a mockumentary about the episode—he's become a much better actor.

Despite the misgivings of the cast, "Homer at the Bat" was a huge hit. It was the first time we beat our competition, The Cosby Show. We beat Cosby several more times after that; within two years his show was off the air. [Actually, The Cosby Show went off the air two months later, having lasted eight seasons. Check your stats, Reiss! —me]

... The episode is still remembered fondly. In May 2017, Homer was inducted into the National Baseball Hall of Fame. Wade Boggs, Steve Sax, and Ozzie Smith showed up at the ceremony. Smith said the number one question he gets asked is "How did you escape the Springfield Mystery Spot?" Boggs said he still sticks up for the Pitt the Elder.