"Ambush Bug" was a gateway drug.

Nearly a decade before Deadpool appeared for the first time in a Marvel comic book, DC introduced the similarly self-aware Ambush Bug in the December 1982 issue of DC Comics Presents. Two and a half years later he was given his own "mini-series" of four issues, the last of which I've had in a shoebox for decades now.

ABC's Moonlighting debuted a couple months before the first issue of Ambush Bug was published, but, as far as I can remember, its main characters, Maddie Hayes (Cybill Shepherd) and David Addison (Bruce Willis), didn't break the fourth wall or comment on the fact that they were characters on a TV show until the second season, starting in the fall of '85. It was during that second season that I saw reruns of The Monkees, on MTV, for the first time, another series with plenty of "meta" moments.

My ten-year-old self couldn't get enough of that style of humor. Looking back, Ambush Bug may have been the entry point. (I'd watched Looney Tunes characters break the fourth wall years earlier in those cartoons, but I can't say with any certainty that I got the joke.) 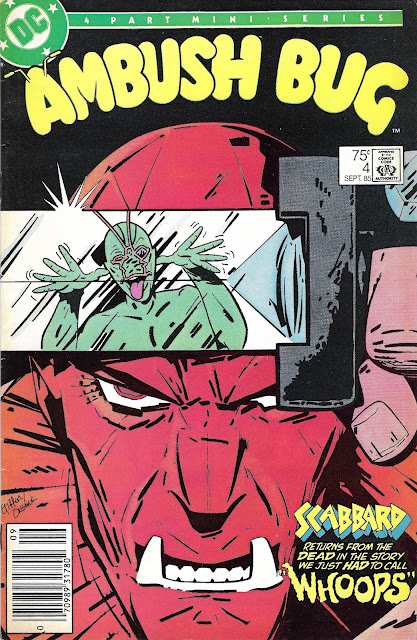 As Ambush Bug prepares to face off against the villain Scabbard, a note appears in an otherwise empty panel on the page: it's from Ambush Bug creator Keith Giffen's wife, Ana, informing the comic book's editor, Julius Schwartz, that Keith has a 24-hour virus; their son Kyle drew the following page in order not to miss DC's deadline. (She adds, "P.S. Kyle would like his original page back as soon as possible, so he can sell it at the NY con.") 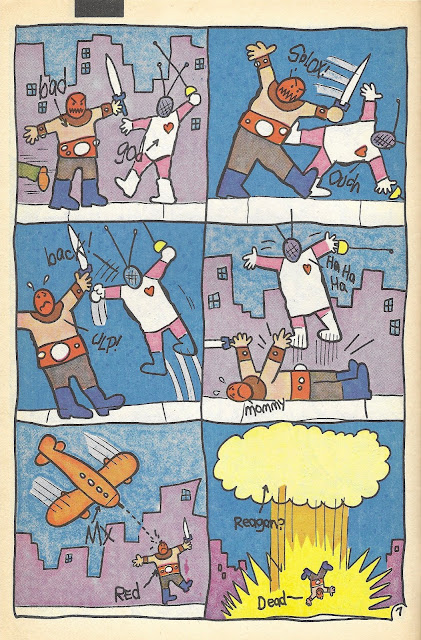 One page later Scabbard realizes he's in the wrong comic book—he's supposed to be wreaking havoc in Thriller (although, according to Wikipedia, that comic book's run ended in November of '84 after 12 issues)—so he exits, leaving Ambush Bug with dead air to fill. 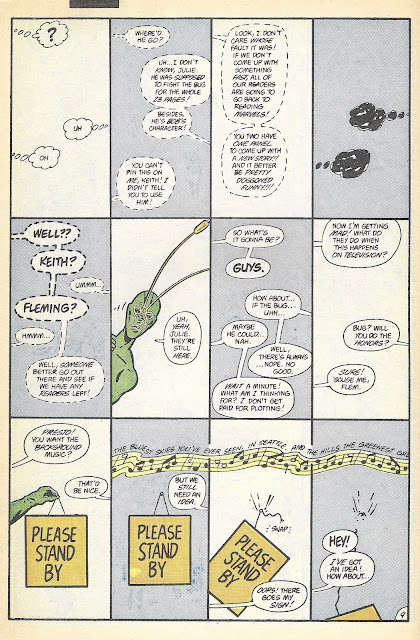 Unlike Deadpool, Ambush Bug will probably never headline a movie of his own, but his influence on comic-book comedy, not to mention my own appreciation for the silly, the stupid, and the sublime, is worth noting.
Posted at 10:28 AM No comments: