To be morally deep, or not to be?

Because school shootings were rare in 1993, that wasn't as big a deal as it would've been just a few years later, even after the ultraviolent preteen villainy on display in RoboCop 2 (1990)—Danny was at least taking up arms against villainy—but as Anthony Linehan points out on his blog Movie Tie-In Toys, the hand accessory for Mattel's Danny Madigan action figure was a grappling hook, which "hasn't any basis in the movie itself!" 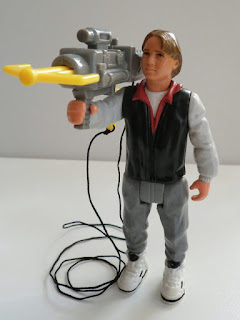 Hook Launchin' Danny was presumably created to placate parents who wouldn't have been thrilled with Heat Packin' Danny, but it was also a form of wishful thinking: audiences never got hooked on Last Action Hero, especially when compared to Jurassic Park, considered its main competition for the summer movie season before anyone had seen either movie. By the end of the year, Jurassic's $357 million gross in North American theaters had cast a T. Rex-sized shadow over Hero's $50 million gross.

(Even two decades removed from its overhyped debut, Last Action Hero doesn't work as an action movie, a fantasy, or a comedy, but it did have potential. Its best line, in my opinion, is spoken by Schwarzenegger's character when he meets the "real" Arnold at the premiere of "Jack Slater IV," their franchise's latest sequel: "You've brought me nothing but pain." Now, there's a starting point for a great meta-movie.)

Incidentally, in an essay on morality in fiction in the winter 2015 edition of Pleiades, Phong Nguyen, the literary journal's editor, states:

I ask my writing students, "What's the difference between Hamlet the Prince of Denmark and an action hero?" Like any good revenge story, the hero gets his man in the last act, at the cost of his own life. But in the meantime, rather than battling the king's goons (though he does accidentally kill poor Polonius), the Great Dane is waging an internal struggle with his conscience. What does it mean to kill a man? What does it mean to die? When the ghost of your dead father comes to you in the night and says, "avenge me," your mission should be obvious. No further thought is required. Vin Diesel or Dwayne "the Rock" Johnson would simply ride in on a motorcycle armed with two pistols or a medieval axe and stylishly polish off Claudius with a cinematic flourish. They may even be right to do so. But they are not afflicted with doubt, or thought, so what we've witnessed is actually mere moral catharsis, the opposite of moral depth.

True, but could moral depth ever produce as memorable a twist on Hamlet's famous "To be, or not to be" soliloquy as the one that's followed by a huge, Elsinore-demolishing explosion in Last Action Hero? Doubtful.

Frank and Nicky and Rudy and Hillary

In 2000 Mark Jacobson interviewed '70s heroin kingpin Frank Lucas for New York magazine. The resulting article became the basis of the Denzel Washington movie American Gangster, and on the eve of its release in the fall of 2007, Jacobson, once again writing for New York, moderated a conversation between Lucas and former rival Nicky Barnes. Here's an excerpt:

MJ: Rudy Giuliani chased both you guys when he was D.A. What do you think about him running for president?

NB: Giuliani would make a good president because he's a principled guy.

NB: Hillary will be the next president.

FL: No question about it.

The lesson: Stay in school. Don't do drugs. Don't deal drugs either, but the most successful dealers are usually the ones who don't mess with their own product, so when you look at it that way— SHUT UP, SOCRATIC METHOD, WHICH PEOPLE LEARN BY STAYING IN SCHOOL.