The last in a series of brief artist biographies I wrote for Rhino.com in the spring of 2010 ...

When Peter Gabriel left for a solo career in 1975, Genesis was presumed to be on its last legs. But, true to its name, the prog-rock band was reborn, becoming an adult-contemporary pop juggernaut after promoting Phil Collins from drummer to lead singer.

Genesis's sophomore album provided a glimpse of their future as progressive-rock stylists, including experiments with song structure and length ("The Knife" is nine minutes long) and complex instrumentation. Mayhew and Phillips then departed, making way for former child actor Phil Collins on drums and, shortly thereafter, Steve Hackett on guitar. 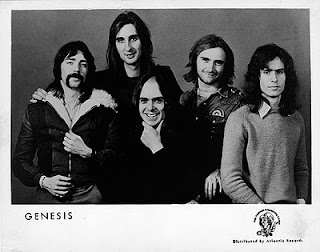 Their lineup now solidified, Genesis started gaining recognition as a popular live act. Gabriel wore makeup and various costumes onstage as the group's concerts evolved into elaborate theatrical affairs, quietly ushering in the era of music videos. In 1972 came Foxtrot, which closed with the 23-minute epic "Supper's Ready," and by the time Selling England by the Pound hit record stores in '73, Genesis was achieving momentum on FM radio in the United States.

The Lamb Lies Down on Broadway (1974) was the band's most ambitious offering yet, a double-LP concept album about a Puerto Rican boy in New York City; the accompanying tour, in which the entire album was re-created each night, featured laser-light effects and spoken narration by Gabriel. Lamb was a sizable hit, but Gabriel's dominance over the project created a rift between him and the rest of the band. In May of '75 he announced he was leaving Genesis.

Collins took over as lead vocalist, but it wasn't until after Hackett left in '77 that Genesis shifted from progressive rock to a more mainstream pop sound, scoring their first U.S. Top 40 hit in 1978 with the gently melodic "Follow You Follow Me," from And Then There Were Three.

The '80s found the remaining trio of Collins, Rutherford, and Banks churning out one hit after another as Genesis—1980's "Misunderstanding," 1983's "That's All," and five top-five smashes from 1986's Invisible Touch (the title track and "Land of Confusion," among others)—with additional hits coming from Rutherford's side project, Mike & the Mechanics ("All I Need Is a Miracle," "The Living Years"), and Collins's solo albums and movie-soundtrack contributions—he scored seven number-one singles that decade, including "One More Night," "Against All Odds," and "Two Hearts," making him one of the biggest pop stars of the Reagan era.

Collins recorded one more album with Genesis—1991's We Can't Dance, which generated five more Top 40 singles—before leaving amicably in '96 to pursue other opportunities. Rutherford and Banks continued with a new vocalist, Ray Wilson, for 1997's Calling All Stations, but it's the last studio album to date from the group.

The 1971-'75 lineup of Collins, Rutherford, Banks, Gabriel, and Hackett reunited in 1999 to record a new version of The Lamb Lies Down on Broadway's "The Carpet Crawlers" for a greatest-hits compilation, and in 2007 the Invisible Touch-era trio embarked on a 40th-anniversary tour. Genesis was inducted into the Rock and Roll Hall of Fame in 2010, a fitting honor for a band that took the word "progressive" to heart and never stopped moving forward.
Posted at 10:18 AM No comments: 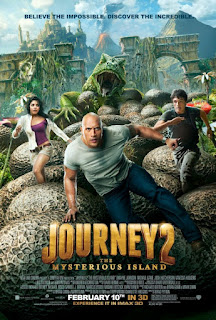 Journey 2: The Mysterious Island, starring Dwayne Johnson, opens in theaters today. In case you're wondering why you don't remember a previous Johnson movie called Journey, this one's a sequel to Journey to the Center of the Earth (2008), which starred Brendan Fraser, not Johnson (both films are loosely based on Jules Verne novels). And it's not the first time this athletic actor has grabbed the baton after the initial lap.

Johnson, a former WWE wrestler who went by the name of "the Rock"—and who's taken the John Cougar Mellencamp route on the big screen, beginning his film career with his wrestling moniker, transitioning to Dwayne "the Rock" Johnson, and now using just his first and last name—once costarred in a movie with Fraser, though they didn't share any screen time. But Johnson's supporting role in The Mummy Returns (2001) was so well received, at least by the studio heads that took calls from his agent, that he was given his own spin-off, The Scorpion King, in 2002.

Since then Johnson has made a smart habit of taking supporting parts in sequels or already successful franchises, including Be Cool (2005), the film adaptation of Elmore Leonard's follow-up to Get Shorty, and Fast Five (2011), the fifth iteration of The Fast and the Furious. (Inexplicably, 2010's Faster wasn't a sequel to anything.) He also showed up at the end of Tyler Perry's Why Did I Get Married Too? (2010), and this summer he'll play a live-action action figure in G.I. Joe: Retaliation, a retooling of the series that began three years ago with G.I. Joe: The Rise of Cobra.

Because Johnson himself was already an established brand when he began making movies a decade ago—with a nickname like "the Rock," how could he not inspire confidence in studio executives eager to extend the life of their "tentpole" action franchises?—it makes sense that he would want to hitch his fortunes to movies with built-in name recognition. Johnson also appeared in the remakes of Walking Tall and Escape to Witch Mountain, which was renamed Race to Witch Mountain; the 2005 adaptation of the popular video game Doom; and the Steve Carell-Anne Hathaway update of the TV series Get Smart (2008). A cameo in Reno 911! Miami continued the trend.

In The Rundown (2003), one Johnson movie that isn't a sequel or a remake, Arnold Schwarzenegger makes an uncredited appearance walking past the muscular star in a crowded club. It's a symbolic passing of the torch from one action hero to another ("Have fun," the Terminator says). Johnson still hasn't reached the same box office heights as Schwarzenegger in his prime, but by signing up for ensemble parts in Fast and/or Furious and G.I. Joe sequels and picking up where Brendan Fraser left off on his Journey, Johnson is showing Hollywood that he does have the same business acumen as Schwarzenegger.

Besides, if this acting thing doesn't work out, he can always run for office.
Posted at 10:43 AM No comments:

My uncle's name has shown up a few times recently in the list of search terms that have brought people to this blog. Until now, though, his name had only appeared in a 2008 post about my grandparents; that's because my grandfather's full name was George Walter Stovall.

Walter wrote two novels in the late '70s after spending nine years as a reporter and editor for the Associated Press alongside colleagues like Nicholas Pileggi (Wiseguy) and Thomas Harris (The Silence of the Lambs). (I also discovered last year that Walter has a decades-old connection to American Splendor writer Harvey Pekar.) Both novels are out of print, but with any luck the rapid rise of e-book technology will make them available once again. 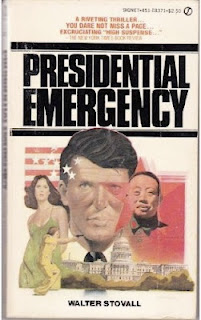 Walter's debut, Presidential Emergency—it was originally called "A Grasshopper's Tale," I believe, but the publisher, Dutton, wanted a more commercial title—came out in 1978 and was hailed as "a riveting thriller" by The New York Times Book Review. In the following excerpt Thack Forbes, an adviser to U.S. president Joseph Hamilton, has been handed a letter by the vice president, Lawrence Melville, in which the commander in chief appears to confess his future plans to a judge.

It took Forbes several minutes to read the letter. Many of the words were nearly illegible, so cramped was the handwriting. He was amazed that so much could be crowded onto a single page.

Forbes stared at it. He noticed that it hadn't been folded. He was appalled at the self-pity, the grandiose delusions, the bizarre conceptions of history. He felt hurt, as if he had read a letter to another man from a woman he was secretly in love with.

He read the letter again quickly. A fist behind his navel squeezed shut.

For the first time in many years Forbes was surprised.

"What should we do, Thack?" Melville's voice was subdued. He looked earnestly at Forbes.

Forbes walked to the desk and took another cigarette. He lit it with his gold presidential lighter. He realized he was smoking more than usual.

"The obvious thing is to get to Roundtree," said Forbes. "Have a talk with him. It's clear Hamilton respects him. I didn't know they were so close, but it seems they are." He described his earlier conversation with Roundtree, adding the details of his unusual introduction to Vest. Melville and Hibbitt listened tolerantly; their expressions conveyed that they found the story interesting but not really consequential. Hibbitt cut him short by saying that Vest had a reputation for eccentric behavior.

"Roundtree has tried to talk to him," Melville put in quickly. "I was told this by a good source, a very good source. My source said Roundtree didn't think it did any good." He was on his feet; he picked up a glass swan and examined it; the swans were his favorites. "According to my source, Roundtree said Hamilton thinks only of the treaty and doesn't seem to comprehend the gravity of ... the other contingency."

"Maybe there's nothing to it," said Forbes. "Maybe he was just rambling on. Maybe it's just carelessness. He's capable of talking very carelessly, believe me."

"Good God, man!" Melville exploded. "Can't you see what we're faced with? We're talking about the possibility of the president of the United States defecting to Red China!" 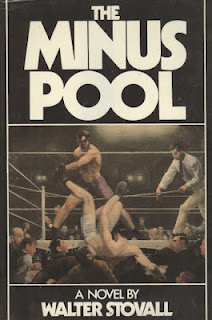 In 1980 Wyndham published Walter's second novel, The Minus Pool, a tale of high-stakes gambling on a global scale. Kirkus Reviews called it "lively nonsense" but, more importantly, "a lot of fun."

Katz scowled. Then he put his hands together and touched his chin. "Let's get down to business, Mr. Leitstein, if you don't mind," he said somewhat irascibly. "We wasted quite a bit of time with your colleague McManus. We don't intend to waste any more. You have something we need. We have something you want."

The waitress brought his brandy. He tilted the balloon and sniffed it and took a sip. He had first tasted Armagnac in Havana before the war. There had been a bar where they knew he was an ex-fighter; he stopped in whenever it was raining and the track was sloppy at Oriental Park. One of the regulars, whose name he never caught, was a big, loud American with a mustache and a sunburn; the guy got a load on every afternoon and talked about boxing and whores—Kansas City whores, not Havana whores. Everybody seemed engrossed by the guy's monologues; everybody except Nathan Leitstein, who disregarded noisy drunks; and the fact that even one customer wasn't paying attention to him drove the guy to talk at the top of his lungs. One day the guy cornered him at the bar and mumbled in his face that it would be a noble and glorious thing if they stepped outside and found out who had the best left hook. Without looking up, he placed his thick-knuckled left hand on the bar, palm down so the guy could see, and said quietly, "Thanks, pal, but amateurs don't always get up healthy from left hooks." The guy looked as if he were about to say, this isn't the way it was supposed to happen; then his face constricted in pain like a sudden toothache and he walked unsteadily out. The bartender, who had been watching, poured him a drink from a round, flat bottle. "Algo especial, Señor Leitstein," he said with a modest smile of relief, "Armagnac. Salud," and added, shaking his head, "Ernesto es un buche y pluma." He never saw the guy again.

He took another sip and considered Katz's gambit. He guessed that Katz and the others had heard that their $115 million would not be welcome at the Commercial and Claims Bank. He thought of his return call to Jerusalem; the retired general had been called out of the country, he was told, and could not be reached; he had left the message with the woman who answered.