"I've never learned from success," he says. "'Get Lucky' allowed me to get a record deal for the new Chic album, but I couldn't tell you how to make that song again. Things just line up right." He frowns. "As a producer, I help an artist make a record that I'd want to hear as a fan. But I had no idea 'Get Lucky' would be so huge. It's always up and down. The way you know you're good is if there are more ups than downs ... Let me play you something." He finds a YouTube video for a creamy Al Jarreau ballad from 1986 called "Across the Midnight Sky." "L Is for Lover is the album," he says. "It's the best thing I ever made that didn't sell." He plays air guitar along with himself. "The theme from Moonlighting was on it, but Al and I thought it wasn't cool enough. So we took it off the album. That becomes a hit, and the album sank. Shows what I know."
—from "The Deep Hidden Meaning of Nile Rodgers" by David Marchese, New York magazine, July 27, 2015 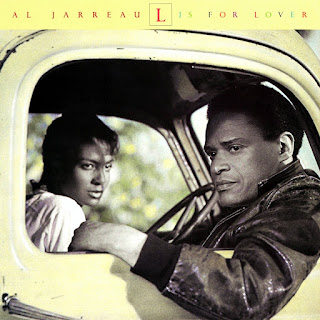 To my non-golden ears, every song on L Is for Lover, which has a flawless side one and is my favorite of Jarreau's albums, could've appeared on Moonlighting and fit the general atmosphere of the show—except for "Across the Midnight Sky," which sounds like something Robert Guillaume might've pressured the producers of Benson into letting him perform on a "Benson and the rest of the governor's staff go to Las Vegas for some reason" type of episode late in that series's run.

I wonder why Rodgers and Jarreau thought Moonlighting's theme song "wasn't cool enough." Rodgers also says on YouTube, in the comments under the posting of "Across the Midnight Sky" that's mentioned in the New York article, "I love this cut and this album. It's one of my greatest works. It would have been a smash had we not given 'Moonlighting' to Irving Azoff for a TV soundtrack album that was a huge hit and 'Moonlighting' was the single. I've made many dumb moves in my career. That was a huge one.﻿"

But L Is for Lover came out in September of '86, whereas the Moonlighting soundtrack album wasn't released until after the '86-'87 season had ended; my Billboard Top 40 Hits book lists Jarreau's theme-song single as entering the Top 40 on July 4, so I would imagine the album followed soon after. That version of the theme song wasn't used in the show's opening credits until the fall of '87, so maybe the inclusion of Moonlighting's theme on L Is for Lover wasn't possible once ABC or Azoff, then the president of MCA Records, decided that the updated version should be held back to promote the soundtrack, released on MCA.
As with a lot of Moonlighting-related minutiae, the truth is probably buried in a 30-year-old filing cabinet somewhere in Culver City.

(In some countries the B-side of the Moonlighting theme's single was "Golden Girl," a track from L Is for Lover. Were any customers fooled into thinking that Jarreau had also recorded the theme song to NBC's The Golden Girls, which tied Moonlighting in 1987 with 14 Emmy nominations?)
Posted at 10:58 PM No comments: