Unless you were living under a rock in 1978, the sound of the Bee Gees was inescapable. The brothers Gibb—twins Robin and Maurice and older brother Barry—were all over the radio that year thanks to "How Deep Is Your Love," "Stayin' Alive," and "Night Fever," their number-one singles from the record-breaking Saturday Night Fever soundtrack album. Then there were the smash hits they wrote for other artists, including "If I Can't Have You" (Yvonne Elliman), "Emotion" (Samantha Sang), and "Grease" (Frankie Valli), not to mention the singles they penned with their little brother, Andy, who rocketed to the top of the charts himself with "(Love Is) Thicker Than Water" and "Shadow Dancing."

The Bee Gees may have become the poster boys for the American disco explosion of the late '70s, but their origins were much different. Born in England, the Gibbs started performing together as children in 1955. A few years later their family moved to Brisbane, Australia, where a local DJ started playing their songs on the radio, leading in short order to club gigs, TV appearances, and a debut album in 1965. Emboldened by the Beatles' success in the United States, the Gibb brothers returned to England the following year, where manager Robert Stigwood heard their Australian LP and signed them to a five-year contract with Polydor Records.

In the beginning the Bee Gees' music had a psychedelic, Beatlesque feel; some American DJs and listeners even mistook the group's first hit, "New York Mining Disaster 1941," for a new single from the Fab Four. However, their knack for blue-eyed soul was already evident—their second stateside hit, 1967's "To Love Somebody," was originally written for Otis Redding to sing.

The Bee Gees continued to pick up steam in the U.S. with hits like "I Gotta Get a Message to You" and "I Started a Joke," but a disagreement over which song from 1969's Odessa should be released as a single led Robin to quit the group for a brief period. After the brothers regrouped in late 1970 they scored their first number-one hit in the U.S., "How Can You Mend a Broken Heart," but for the next three years their soft-rock balladry and Moody Blues-style progressive pop failed to generate much interest. 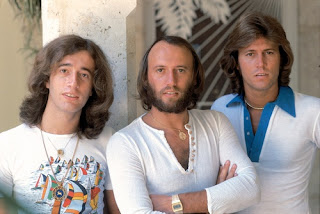 It wasn't until Stigwood introduced the Bee Gees to producer Arif Mardin in 1974 that the second phase of their career began to take shape. Their first collaboration, Mr. Natural, pushed the group in more of an R&B direction than ever before, and on the follow-up, 1975's disco-flavored Main Course, Mardin utilized Barry's now famous falsetto for the very first time on "Nights on Broadway."

Main Course's "Jive Talkin'" went all the way to number one, as did "You Should Be Dancing," from 1976's Children of the World. The disco boom was coming to an end in the States when Saturday Night Fever arrived in movie theaters in December of '77, but the John Travolta film and its iconic soundtrack album, which eventually sold 40 million copies, revived disco's fortunes and then some. When the Bee Gees released their next album, Spirits Having Flown, in early '79, it yielded three more consecutive number-one hits: "Tragedy," "Too Much Heaven," and "Love You Inside Out."

The Bee Gees kept a fairly low profile in the first half of the '80s, contributing new songs to the soundtrack of Saturday Night Fever's sequel, Staying Alive (1983), and writing hits like "Heartbreaker" for Dionne Warwick and the Kenny Rogers-Dolly Parton duet "Islands in the Stream." In 1989 they proved they could still scale the charts themselves when their single "One" landed in the Billboard top ten, a fitting comeback for three brothers with one unforgettable sound.
Posted at 1:53 PM No comments:

My infatuation with Three Days of the Condor is forever (dot dot dot).

Film critic Juliette Small invites her daughter, Erica, and Erica's friend Katherine to join her for an advance screening of a new Robert Redford movie in chapter 14 of Forever..., Judy Blume's controversial 1975 novel about young love, which I'm reading for a grad-school research paper on young-adult fiction. 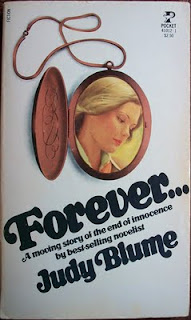 After the picture Mrs. Small asked me, personally, what I thought of it.

"I don't think it could happen that way in real life ..."

"Exactly!" she said. "But you wanted it to, didn't you ... you were hoping it would turn out just that way."

"In spite of my review, you mean?"

"In spite of anybody's review."

"I agree with you, completely," Mrs. Small said. 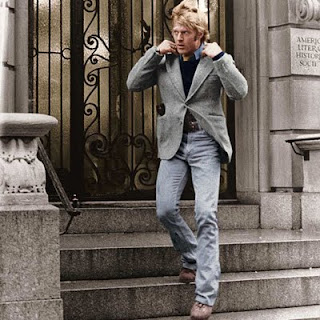 In 1975 Robert Redford starred in two films, The Great Waldo Pepper and Three Days of the Condor. The former was scripted by William Goldman and directed by George Roy Hill, who had previously collaborated with Redford on 1969's Butch Cassidy and the Sundance Kid, while the latter was helmed by Sydney Pollack, who, prior to Condor, had already directed the California native in three films, including the western Jeremiah Johnson (1972) and the romantic drama The Way We Were (1973), costarring Barbra Streisand.

The Great Waldo Pepper is a period piece in which Redford plays a 1920s stunt pilot, but Three Days of the Condor is a contemporary thriller that asks audiences to believe that a guy as handsome as the Sundance Kid is employed by the CIA as a bookworm rather than a dashing James Bond clone. As Katherine says, "I don't think it could happen that way in real life." But you want it to.

Waldo was released in March of '75; Condor came out in September. When Katherine, the protagonist of Forever..., takes a train from Westfield, New Jersey, into New York City with Erica and her mom to see "a preview of a new Robert Redford picture," it's either late March or early April in the book's narrative. Yes, I'm fully aware of the possibility that Blume isn't talking about any Redford movie in particular—for one thing, I don't know when exactly Forever... was published in '75 (spring, summer, etc.), or if she even had a particular year in mind besides "right now, whenever that is" when she wrote the book, or if copyright issues prevented her from using the title of an actual Redford movie—but a boy can still dream, even when he's no longer a young adult.
Posted at 7:02 PM No comments:

another comic strip about piracy (not the "arr, matey" kind)

Is it wrong? Should fans be offended? Will I post a new comic strip each month about the music industry's financial woes, gradually exposing myself as someone who can't comprehend economic issues unless they're illustrated—literally—with cartoon characters and joke-filled word bubbles? (Answers: Maybe, screw 'em, and God willing if one of The Lockhorns suddenly has a bone to pick with the iTunes Store come Mother's Day.)
Posted at 8:20 PM No comments: