"Television's really not my thing."

In November 2013, a little less than halfway through Person of Interest's third season, Taraji P. Henson's character, Detective Joss Carter, was killed off. Henson was billed third on the show, behind Jim Caviezel and Michael Emerson, but she was the only cast member who could boast of having an Oscar nomination on her resumé: Best Supporting Actress, for The Curious Case of Benjamin Button (2008). 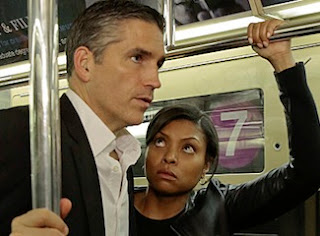 "I knew when I signed onto the project that the character would have a beginning, middle and end," Henson said on Late Show With David Letterman, according to TheWrap.com, the day after her final episode aired. "I do more feature films, and television's really not my thing ... I thought it would be the perfect venue for me to do a television show and not be stuck for seven years."

A little more than a year later Henson is costarring with Terrence Howard (also her costar in the 2005 feature film Hustle & Flow) in Empire, Fox's new prime-time hit. The network renewed it for a second season shortly after its second episode aired last week, and although it's anyone's guess as to whether Empire will go the distance of seven seasons, it's clear that even if the feeling isn't mutual, television has a thing for Taraji P. Henson.
Posted at 12:31 PM No comments: