After more than two decades together, Stone Temple Pilots have proven themselves to be one of the most resilient bands in rock 'n' roll. Initially dismissed by critics as Pearl Jam and Alice in Chains wannabes, the San Diego quartet were a hit with listeners from the start, and despite various breakups, side projects, and internal squabbles over the years, STP continue to record and tour, proving they've still got fuel to burn.

The band's origins date back to 1986, when Scott Weiland (vocals) and Robert DeLeo (bass) met at a Black Flag concert in Long Beach, California. Quickly realizing they were dating the same girl, they moved into her apartment once she left town, and decided to form a band. With DeLeo's brother Dean on guitar and Eric Kretz on drums, the band named themselves Mighty Joe Young and slowly built a following in San Diego's clubs. They kept their distance from the L.A. music scene and its corporate influence, but by 1992 Atlantic Records had come calling, and that fall the group released their debut album, Core, under their new name, Stone Temple Pilots.

Core was an immediate success, and the tracks "Sex Type Thing," "Plush," and "Creep" became staples on MTV and alternative radio stations. Though STP's sound was accused of being derivative of grunge, it was closer in spirit to '70s stadium rockers like Led Zeppelin and Kiss, tethering hard-rock riffs to concise melodies. The band's winning streak continued with 1994's Purple, which spawned the hits "Vasoline," "Interstate Love Song," and "Big Empty." 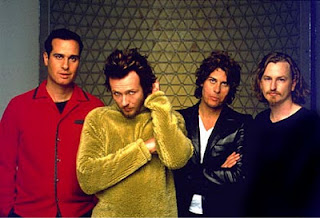 In the spring of '95 Weiland was arrested for possession of cocaine and heroin and ordered to enter rehab for his drug addiction. Upon completion of his treatment program he joined the rest of STP for the recording of their third album, Tiny Music ... Songs From the Vatican Gift Shop, which debuted at #4 on the Billboard 200 in March of '96. It didn't reach the same commercial heights as its predecessors, though, partly because Weiland relapsed that spring and had to return to rehab, forcing the band to cancel its summer tour.

At that point Stone Temple Pilots went on hiatus. The DeLeo brothers and Kretz formed Talk Show with singer Dave Coutts and recorded a one-off, self-titled album (1997), and Weiland worked on his first solo LP, 12 Bar Blues (1998), in between arrests and trips back to rehab. STP reunited to record No. 4 in 1999, after which Weiland spent five months in jail for violating his probation.

To the surprise of many, the band soldiered on, following up No. 4 and its hit single, "Sour Girl," with Shangri-La Dee Da in the summer of 2001. But after Weiland and Dean DeLeo almost came to blows onstage in the fall of '02, it looked like Stone Temple Pilots had finally crashed and burned. Weiland then joined Slash in the hard-rock supergroup Velvet Revolver, while the DeLeo brothers formed Army of Anyone with Filter lead singer Richard Patrick.

In 2007 Weiland reconciled with his former bandmates, and after quitting Velvet Revolver because his new bandmates reportedly nixed the idea of him doing reunion concerts with the old ones, he joined STP for a 65-date tour in the summer of '08. Their chemistry reestablished, the band entered the studio a year later, with their self-titled sixth album set for release in May 2010.
Posted at 12:23 PM No comments:

"What's hard is knowing that KeeKee may be six or seven now but that in three or four years she'll be thirty."

Last week in my Literature and Resources for Young Adults class we were assigned Christopher Paul Curtis's Bucking the Sarge (2004, Random House), which is narrated by a 15-year-old named Luther T. Farrell who works for his mom, "the Sarge," and is forced to grow up fast. Below are two excerpts I particularly liked. 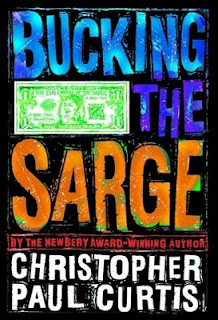 "There's always something desperate and fake when you have to deal with someone who's about to get evicted. They'll say anything to try and get another rent-free week or two. That makes it easy not to listen to what they have to say, 'cause you know there's a pretty good chance they're lying. It's nothing to make your heart hard to that. Even if you feel bad for them odds are they're not doing nothing but playing you, and who wants to get played?

"People will throw their babies in your face or have their sick, dying mommas cough on you or they'll tell you the check's in the mail or that the Department of Social Services computer is down or that they've got the inside word on what next Thursday's number is going to be or  any of a million other stupid excuses as to why they haven't paid the rent in three months. It gets real easy to let those excuses slide right by you 'cause it's real obvious that they are what Ms. Warren calls rhetoric, or speech designed to influence.

"What's hard is a stupid little picture drawn by a little mostly-As student who's got a dope fiend momma. What's hard is knowing that that girl was gonna be living in a busted-up Impala until her momma drags her into some other hole to live. What's hard is wondering, and I know some philosopher somewhere has wondered this and probably figured it out to the day, how much longer that little girl has before she's beaten down so bad that being room C's Citizen of the Month doesn't mean a thing. What's hard is knowing that KeeKee may be six or seven now but that in three or four years she'll be thirty." —pg. 61-62

"Once you get some years on you and a little experience under your belt it turns out that those things you have great expectations about are just as tired and played out as anything else in your life. I don't know why so many of the fools I go to school with can't wait to get older, it seems like with age fewer and fewer things are exciting. And it seems like the more excited you are about something, the more time you spend dreaming and wondering and fantasizing what it's going to be like, the more disappointing it turns out to be.

On the morning of February 1, just a few hours before Chicago was hit by its biggest blizzard since 1999, SmoothChicago.com sent me an e-mail with this subject heading: "Weather Advisory - Chicago & Vicinity."

"Here in the Midwest, we know how to deal with the snow," the e-mail said. "The BIG STORY is that very soon, things will be heating up in Chicago."

Needless to say, this fake severe-weather warning was no help earlier today when I found myself wading through 18-inch-tall snowdrifts in shorts and flip-flops. I probably should've read the next paragraph of the e-mail before heading outside:

"The SmoothChicago.com Weather Center has issued a HEAT ADVISORY for Saturday February 12th at the DuSable Museum in Chicago. It is going to be HOT." 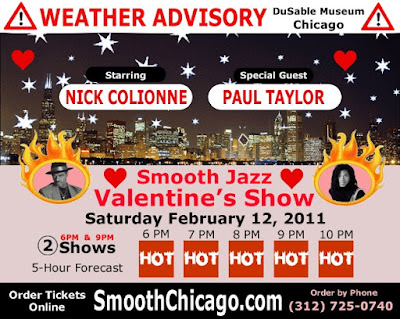