"I Won't Give Up" isn't on any of Simply Red's albums, even as a bonus track on the "collector's edition" reissues﻿ that Warner Music UK put out in 2008. However, a live version of the song, recorded on July 8, 1986, at the Montreux Jazz Festival, appears on the Picture Book reissue's bonus DVD. (Some footage from the Montreux set has been uploaded to YouTube, but only the audio of "I Won't Give Up," featured below, is available on that site.)

The Picture Book reissue's liner notes indicate that Mick Hucknall wrote "I Won't Give Up," and on the DVD he introduces it as "another new song" after the band has already played "The Right Thing," which later became the lead single from Simply Red's 1987 album, Men﻿ and Women. Five other songs from that album make it into the band's performance at Montreux, but "I Won't Give Up" is the only song in the set that features backing vocalist Janette Sewell front and center. 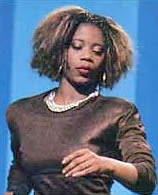 Sewell also provided vocals﻿ on Men and Women, but I can't find any information on whether or not "I Won't Give Up" was recorded for the album as a demo or otherwise. Maybe Hucknall or Simply Red's management at the time didn't think he should give away such a good song to a backup singer, or maybe Sewell hoped to record an album of her own and asked Hucknall if she could have "I Won't Give Up." Anyone out there know the official story?

I think Men and Women is an underrated album in Simply Red's catalog, but I'm surprised that a cover like "Let Me Have It All" made the cut instead of "I Won't Give Up." I like the band's version of that Sly & the﻿ Family Stone track (from 1973's Fresh), but since Bunny Wailer's "Love Fire" occupies the "reggae" slot on Men and Women, and since Cole Porter's "Ev'ry Time We Say Goodbye" sounds like nothing else on the record, it's a shame that "Let Me Have It All" wasn't relegated to a B-side to free up space for Sewell's showcase number. She makes the most of her sultry, charged lead vocal from the stage of Montreux Casino, and Hucknall and the rest of Simply Red provide able support. "I Won't Give Up" digs in and doesn't let go.
Posted at 9:10 AM 3 comments: