From my towering pile of ever-yellowing newspaper articles:

"'There is good data showing that noise potentiates anger, aggression if the person has already been provoked and/or witnessed' aggressive behavior, reported psychology professor Gary Evans of Cornell University. 'There is evidence that noise by itself suppresses altruism.'

"In non-scientific terms, that means that if Guy A is not the most stable fellow around, he might behave very poorly with a garden hoe if Guy B next door shoots one more exploding bottle rocket at Guy A's house." —Ross Werland, Chicago Tribune, June 8, 2003

Last year on Netflix my girlfriend and I watched Noise, a movie I'd been curious about ever since I saw an ad for it in another Chicago newspaper, the Reader, in '08. The film, written and directed by Henry Bean, has its moments, but didn't provide the catharsis I was hoping for, probably because there are no scenes featuring Noise's protagonist, played by Tim Robbins, confronting ignorant neighbors or obnoxious moviegoers. However, if you live in New York City and wish you could strangle every car alarm in town with your bare hands, Noise just might be the escapist fantasy you've been waiting for.*

* Sorry, The Avengers, but all you did was create more noise, and besides, you've made enough money already. By the way, I like that The Avengers is supposed to be an ensemble film, yet in the credits at the bottom of its poster Robert Downey Jr.'s name is the only one that appears above the title. One for all and all for one, but in this case it's obvious which one has the most powerful agent.
Posted at 9:42 AM No comments:

In the parallel dimension where Kurt Cobain is still writing and recording music, his drastic shift away from the classic grunge look on Nirvana's most recent tour has baffled fans. 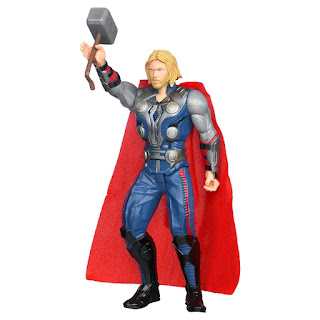