I turned 34 on Friday. And right before I went to bed that night I noticed something about the "wallpaper" on my computer screen, which changes every 30 minutes at the MacBook's whim.

For those of you without a magnifying glass, the photo on the left features Michael McDonald and the stars of 1986's Running Scared, Billy Crystal and Gregory Hines; it's a still from the music video for McDonald's "Sweet Freedom." That photo's been in the wallpaper rotation for several years now, but I didn't notice the number on Hines's jersey until Friday night. It also happens to be the number worn by Chicago Bears running back Walter Payton, who in 1986 led his team to a Super Bowl victory. Running Scared is set in Chicago and was filmed there during the Bears' 1985 season, when they lost only one of their 16 regular-season games.
Shortly after I turned 33, I read a newspaper article that quoted statistics from The Death of the Grownup: How America's Arrested Development Is Bringing Down Western Civilization, including this factoid: "The MacArthur Foundation has funded a research project that argues that the 'transition to adulthood' doesn't end till age 34."

When I read that last year I thought, "Woo-hoo! One more year!" Of course, one year later, with almost nine months of unemployment taking a bite out of my self-esteem, Officially Authorized Adulthood® isn't making a strong first impression. Lucky for it, I believe in second chances.
Posted at 3:19 PM No comments:

We are the invisible people. (Springsteen, write us a song.)

Last week I was leaving the grocery store when a woman approached me and asked if I'd like to buy a copy of StreetWise, the local magazine sold by homeless and at-risk vendors. She said she was trying to get off the street and that selling StreetWise allowed her to not have to panhandle anymore.

I've been volunteering as a proofreader at StreetWise since March. I tried mentioning this to the woman for the sake of small talk, i.e. "Here's something we have in common," but she just looked past me and said, "Uh-huh." As I handed her my two dollars and she gave me a copy of the latest issue, I tried again, thinking maybe I should point to my name on the masthead on the inside cover. "Okay," she said. She wasn't listening.

It's hard being a proofreader. People pretend you don't exist, but the "problem" isn't just going to go away, no matter how many of us you don't employ.

Which movie currently in theaters is a sequel to a remake and a remake of a sequel?

What will you think of next, Hollywood? 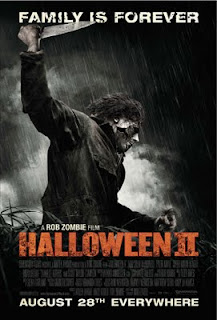 "Halloween 3D," as it turns out, because even though Halloween II opened in third place last weekend, far behind The Final Destination (another horror sequel, with the "The" in the title implying that this is the last installment in the series—for now, anyway), Hollywood can't have enough sequels or 3-D movies or "reboots" in theaters.

I have a feeling "Halloween 3D" won't be a remake of 1982's Halloween III: Season of the Witch, a sequel that ditched the Michael Myers character from the first two films to tell a story about a Halloween-mask manufacturer's sinister plan to kill millions of children with its black-magic-enhanced product. Halloween III wasn't well received by moviegoers or critics at the time, so my script for "Halloween 3A: Season of the Witch 2" never came to pass, with our heroes from the first Witch racing to prevent Donovan's 1966 song "Season of the Witch" from appearing in any more movies or TV shows. It's a fine song, but, you know, enough already.