a quarter-century of "The Simpsons"

The Simpsons debuted as a primetime series on Fox 25 years ago today. Back in 2000 I posted the following comment on a website called Jump the Shark. At least I think that was its name; I'm not sure it exists anymore, at least not in its turn-of-the-21st-century format.

I originally wrote my very long comment in a Word document on my computer. Recently I discovered the file among a bunch of other old files and decided to regurgitate it because, as John Cusack's protagonist says in the film version of Nick Hornby's High Fidelity (which came out in 2000), "I agreed that what really matters is what you like, not what you are like." Until you reach your late 30s and that's no longer necessarily the case, which is why a two-decades-removed sequel to High Fidelity, whether on the page or on the big screen, would be welcome. In the meantime, just like time, The Simpsons keeps moving forward.

Here's what I wrote about the show 14 years ago:

Overall I'd have to say that The Simpsons still hasn't jumped the shark. I don't think it's as amazing as it used to be, but it still makes me laugh. It had five-and-a-half seasons of near-perfect episodes from the beginning of the 1990-1991 season to the middle of the 1995-1996 season, and it was a little depressing to see the show come down from that high, but the slide was inevitable. You can't sustain intelligent, multilayered, laugh-out-loud brilliance like that forever, and I was wonderfully surprised to see the writers and producers keep the momentum going for as long as they did.

For me, the show started to slip in February '96 with "Scenes from the Class Struggle in Springfield." (Did anyone else notice that the font style of the opening writer-producer credits changed slightly in this episode and has remained different ever since? The letters are a little wider and taller than they were before.) This was around the time when Bill Oakley and Josh Weinstein took over from David Mirkin as executive producers. There's no reason to blame them specifically since the show is such a huge collaborative effort, but it was during their reign that the show became strangely mediocre. It was also around this time that episodes started referencing earlier (and therefore better) episodes, as if to say, "Hey, remember that episode from 1994 where Homer went into space? Yeah, that was a funny one. In fact, keep thinking about that episode while we insert this scene of two characters beating each other up for no apparent reason." 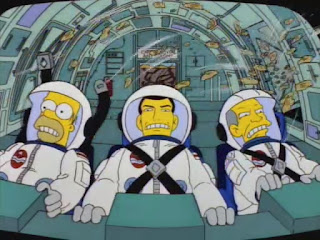 However, there were several wildly funny episodes during this period, like "The Springfield Files" and "Homer's Phobia." I think the show started to rebound in October '97 when Mike Scully took over as the "showrunner." It's a different show now than it used to be, with a bigger emphasis on Homer's wacky adventures rather than the entire family's dysfunctionality (call me a sap, but I miss the tenderness of episodes like "Lisa's Substitute," "When Flanders Failed," and "Sweet Seymour Skinner's Baadasssss Song"), but it's still consistently funny. That's why I don't think the show has jumped the shark yet. If it had stayed mediocre after Scully replaced Oakley and Weinstein, I probably wouldn't be watching anymore.

Many of us have grown up watching The Simpsons in awe and therefore feel very protective of it and defensive about which seasons are best. It's understandable since the show has been so terrific for so many years and has given all of us lasting memories of well-earned laughter. This show has had such a strange history, starting off with a huge merchandising push and media blitz in 1990, which led to some of the first season's episodes landing in the top 10 of the Nielsen ratings. I think most fans would agree that that season doesn't provide many laughs these days, but it's interesting to watch those episodes now and see the blueprint for future greatness.

By the fall of 1990, as The Simpsons entered its first full season opposite The Cosby Show on Thursday nights, the media hype died down and the ratings fell. And then a wonderful thing happened, just like someone mentioned earlier: the show became "a true gem," a work of art. The writers realized that repeating Bart's catchphrases week after week wasn't going to satisfy them creatively, so they opened the show up to the vast realm of comedic and animated possibilities. Even though the show is wackier now than it used to be, it has always operated on dream logic. Unlike King of the Hill, which I also love, The Simpsons has never tried to be realistic. It takes full advantage of its cartoon status, and that's one of the main reasons why it's so rewarding. It also features the greatest running commentary about the love-it-or-hate-it medium of TV that I've ever seen (although SCTV and Late Night With David Letterman came close). And no other show that I've seen has featured so many memorable and endearing supporting characters; we could all rattle off about 50 names. Simply put, The Simpsons is the best TV show any of us will probably ever see in our lifetimes.

... And now, part two of my lecture, in which I attempt to clear up some misconceptions about the show, based on what I read in the comments listed above:

(1) Conan O'Brien was never the head writer of the show. He was never one of the executive producers, either. He was just one great writer out of a dozen great writers during the 1992-1993 season. He's only credited with writing three episodes—"New Kid on the Block," "Marge Vs. the Monorail" and "Homer Goes to College"—and the wraparound segments on "Treehouse of Horror IV," and it's not as if he came up with every joke and sight gag in those episodes. In TV, the writer who comes up with the storyline for an episode gets credited for writing the episode, but this doesn't mean he wrote it all by himself. If Jon Vitti, not O'Brien, had left The Simpsons to host his own late-night talk show, you'd probably be saying, "The show hasn't been the same since Jon Vitti left." I'm not saying O'Brien isn't a talented writer, but some of you are giving him way too much credit for the brilliance of the early episodes. After all, he only wrote for the show for one full season.

(2) As other people on this site have previously stated, Springfield is not actually located in Kentucky. Have you ever noticed the geography of Springfield?It has mountains, it has a volcano, it's next to the ocean, it's very close to Mexico, it's been hit by a hurricane, etc. Sound like Kentucky to you? Springfield is Anytown, U.S.A., and it will always remain that way. It's wherever you want it to be, except it's nowhere at all. However, a previous comment on this site did point out that the Springfield radio station's call letters are KBBL, which would indeed put Springfield west of the Mississippi River on the map.

(3) The first-run episodes of The Simpsons have always gone right into a commercial break after the opening sequence. It's the syndicated episodes that (usually) go straight from the opening sequence into the first block and then put the extra commercial break between the last block and the closing credits. The syndicated episodes also take out a minute of original material so that more local commercials can be added during the breaks. D'oh!

(5) Whoever said the show "will never back down from making fun of all the tight asses out there (and I don't only mean homosexuals)" needs to stop watching The Simpsons. Bigots aren't welcome at this party.

(6) Stop bringing up the "Son of Sam and his Amazing Candlestick" issue, which was resolved long ago. We all know by now that he's the one who shot Mr. Burns, not Maggie. Finally, I want the writers to start showing more of Martin Prince and his raisin roundies! God, I miss that kid.

P.S. Stop making fun of Lisa. She's the conscience of Springfield and the smartest character on the show, which means she doesn't get to say any of the memorable "moron" lines that Homer and Chief Wiggum always say, but she's still a wonderful character. Don't you people realize what a heavy burden it is to be young and highly intelligent? Like Ralph Wiggum, I too love Lisa Simpson.

Ain't no stoppin' this sixth man.

In the scene that provides the title of Chris Rock's newest film as writer, director, and star, Top Five, his character defends LL Cool J's talents as an MC—"before the show," that is:


Unless I'm way off-base, "the show" is NCIS: Los Angeles, the CBS drama on which the rapper-actor born James Todd Smith has starred alongside Chris O'Donnell since 2009. But LL's first network series was the family sitcom In the House, which aired from 1995 to '96 on NBC before moving to UPN for three more seasons.

Two years prior to its debut Mr. Smith released his fifth album, 14 Shots to the Dome. On the track "Ain't No Stoppin' This" he grouses, "I guess I need a TV show to get mine / But I don't feel like kissin' no director's behind."


Well, not yet anyway. And if you don't kiss the right behind, you may find yourself on the lowest-rated network at the end of the 20th century.
Posted at 9:54 PM No comments: