I thought titles couldn't be copyrighted, which would explain why, for instance, the Replacements could name their 1984 album Let It Be despite the Beatles having used it 14 years earlier. But in The Gross: The Hits, the Flops—The Summer That Ate Hollywood (St. Martin's Press, 1999), author Peter Bart makes it clear that titles can be registered and "coveted":

For a couple of weeks, [director Michael] Bay and [screenwriter Jonathan] Hensleigh met to further refine their ideas before meeting with Joe Roth at Disney. They were twenty minutes into their pitch to Roth when he interrupted to say, "This will be the biggest movie of 1998. I'm making it." 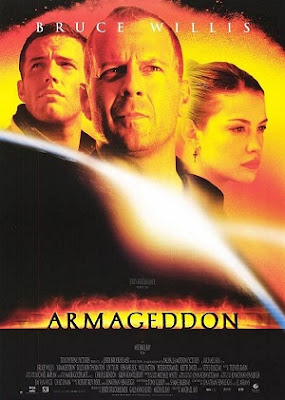 Roth even had a title: Armageddon. The only problem, Roth conceded, was that Joel Silver, a producer at Warner Bros., had registered the title a few years earlier. "I'll do some horse-trading with Joel," he promised, noting that Warner Bros. coveted two titles owned by Disney—Conspiracy Theory and Father's Day.

The Robin Williams-Billy Crystal comedy Fathers' Day (fellow punctuation enthusiasts, note the plural, not singular, possessive) was released by Warner Bros. on May 9, 1997, while the Mel Gibson-Julia Roberts action thriller Conspiracy Theory hit theaters on August 8. The former grossed a disappointing $28.5 million; the latter grossed a less disappointing $75.9 million. Armageddon, on the other hand, made $201.5 million the following year. None of these films will be immortalized in the National Film Registry, but if Paul Westerberg and Tommy Stinson end up recording a new Replacements album titled "Conspiracy Theory Re: Armageddon on Father's Day," I don't think anyone will sue.
Posted at 9:52 PM No comments: