Even beasts need a daily dose of vitamin "C."

It's March, which means it's time to celebrate mental illness brought about by college athletics. But it's also time for another update from my friend and fellow improviser Michael on the state of the English language in signs and packaging created by people who probably didn't grow up speaking English. (In case you're wondering, there's no political subtext here—I won't be moving to Arizona anytime soon.)

Last December Michael moved from Chicago to Los Angeles, where a bag of "dehydrated crush hot chili" was all set to transform into the Antichrist on December 16, 2010, but it looks like nothing happened. Maybe the manufacturer (who's maybe Mayan) meant to write "12/21/2012" instead? Stay tuned. 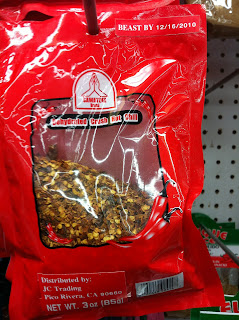 As for the following product's power to fight off scurvy, Michael said, "I guess the use of quotation marks permits advertising a negligible amount." Indeed! 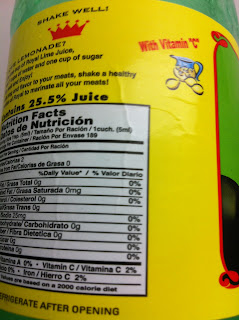 Email ThisBlogThis!Share to TwitterShare to FacebookShare to Pinterest
Labels: English as a second language, proofreading

Are they black enough for you?

"In pushing past the accepted borders of soul music, it is possible that [Thom] Bell, [Isaac] Hayes, Gamble and Huff, and all the others were moved at least in part by their own upward mobility. It could also be that their fascination with sophisticated symphonic soul reflected what longtime R&B record producer Ahmet Ertegun characterized as African Americans' musical orientation towards the future—'what's next.' For these musicians, 'what's next' may have meant exploring the freedom to move beyond stultifying racial categorizations that consigned them to a particular kind of R&B—raw, straightforward, and unadorned. Stevie Wonder certainly made music that spoke to the dreams and disappointments of African Americans, and yet he categorically rejected the label 'black musician.' 'That's putting me in a particular box,' he insisted, 'and saying ... stay ... right ... where ... you ... are!' Over the years, Philly producers Kenneth Gamble and Leon Huff have positioned themselves differently when questioned about the 'blackness' of their music. In early 1973, Gamble argued that black artists no longer had to go through a 'whitening process' because the black market was now large enough to sustain them. (Certainly [Philadelphia International Records, Gamble and Huff's label] produced any number of socially relevant songs geared to black listeners.) He also said that he and his partner 'never thought along the lines of a black music thing,' and on yet other occasions that they thought 'green.' But the critical disparagement of PIR's sweet soul (mostly at the hands of white critics of rock music) infuriated the two producers. Huff went so far as to complain that these critics 'cannot really hear black music' and find it difficult 'respecting black cats without patronizing us.'"