Before Michael Jackson, the Beatles, or even Elvis, the biggest pop star in America was Frank Sinatra. In a career that spanned nearly 60 years, the baritone crooner from Hoboken, New Jersey, captivated audiences with a suave, almost conversational style that cut straight to the heart of each standard he made his own.

Francis Albert Sinatra dropped out of high school to chase his dream of being a singer, and in 1939, at age 23, he was hired as the vocalist in Harry James's big band. After six months he left to join Tommy Dorsey's outfit, and together they had more than a dozen top-ten hits, including "I'll Never Smile Again," which was number one on July 20, 1940, the day Billboard published its first chart.

Sinatra stepped out on his own as a performer in 1942 with Cole Porter's "Night and Day," becoming America's first teen idol later that year when he opened for Benny Goodman at New York City's Paramount Theater—young girls went wild. Columbia Records signed him as a solo artist in '43, and although a lengthy musicians' strike prevented Sinatra from recording again until the end of the following year, the label reissued a 1939 recording of "All or Nothing at All" by Harry James and Sinatra that shot to number one on the heels of the singer's newfound superstardom.

Sinatra appeared on popular radio shows like Your Hit Parade, and by 1945 his acting career was on the rise at MGM. He had eight top-ten hits that year, including "Saturday Night (Is the Loneliest Night of the Week)," written by Jule Styne and Sammy Cahn, and he made sure the duo were hired by MGM to write tunes for his first musical, Anchors Aweigh, costarring Gene Kelly. It was a box office smash.

"The Voice" left Columbia Records at the end of '52 and concurrently had no radio, TV, or film work lined up. At 37, Frank Sinatra was unemployed—but not for long. He signed with Capitol Records and was back on the charts soon after with "I'm Walking Behind You," and his film career was at its peak with a plum role in From Here to Eternity (1953), for which Sinatra won the Oscar for Best Supporting Actor.

At Capitol he collaborated with arranger Nelson Riddle on albums like Songs for Young Lovers (1954), which featured standards centered on a romantic theme ("They Can't Take That Away From Me," "I Get a Kick Out of You"); they were, in effect, pop music's first concept albums. Ol' Blue Eyes, as he was affectionately known, also recorded dance LPs—Swing Easy! (1954), Songs for Swingin' Lovers! (1956)—that continued to rule the album charts even as rock 'n' roll was taking over the singles charts. 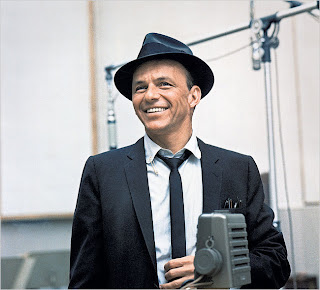 In late 1960 Sinatra started up his own label, Reprise Records, and put his "Rat Pack" friends Dean Martin and Sammy Davis Jr. on the artist roster. Calling his own shots during this period, Sinatra worked with Count Basie ("Fly Me to the Moon"), Antonio Carlos Jobim ("The Girl From Ipanema"), and even his daughter Nancy on the number-one duet "Somethin' Stupid." He also won the Album of the Year Grammy for 1965's September of My Years on the strength of "It Was a Very Good Year."

The Chairman of the Board closed out the '60s with "My Way," the lyrics of which were written specifically for him by Paul Anka; it quickly became a standard. Sinatra cut back on recording and film roles in the following decades, but in 1980 he created yet another standard out of "Theme From New York, New York," originally performed by Liza Minnelli in Martin Scorsese's 1977 film.

Once compact discs were adopted as the standard format for music in the early '90s, Sinatra's back catalog was lavishly remastered and reissued. He then returned to the studio for Duets (1993) and Duets II (1994), which teamed him up with singers like Bono, Aretha Franklin, and Willie Nelson (though none of them recorded in the same studio as Sinatra). Both discs were hugely successful.

everything in its right place

"Evan Connell said once that he knew he was finished with a short story when he found himself going through it and taking out commas and then going through the story again and putting commas back in the same places. I like that way of working on something. I respect that kind of care for what is being done. That's all we have, finally, the words, and they had better be the right ones, with the punctuation in the right places so that they can best say what they are meant to say."

The book received front-page reviews. Critics praised its minimalist style and announced a new school of fiction. Even so, Carver continued to press for stylistic control over his work. He insisted that if Lish wanted to edit his next collection, he would have to keep his hands off. "I can't undergo [that] kind of surgical amputation and transplantation," he wrote Lish in August 1982. "Please help me with this book as a good editor, the best ... not as my ghost," he pleaded two months later.

Lish reluctantly complied. "So be it," he wrote in December 1982 after giving the manuscript to "Cathedral" only a light edit — although he wrote some acerbic criticisms in the margins. Even then, Carver feared a sneak attack. "I don't need to tell you that it's critical for me that there not be any messing around with titles or text," he warned Lish. Publicly, Carver also began to make a break. He made a point of telling interviewers that he controlled every aspect of his stories, invoking the adage that he knew a story was finished when he went through it once and put the commas in, then went through again and took the commas out.

Lish was angered by Carver's rebellion. He began asking his friends whether he should make his "surrogate work" public. They advised him to keep quiet. Don DeLillo, for example, warned him against taking Carver on. "I appreciate, and am in sympathy with, everything you say in your letter," he wrote to Lish. "But the fact is: there is no exposing Carver.... Even if people knew, from Carver himself, that you are largely responsible for his best work, they would immediately forget it. It is too much to absorb. Too complicated. Makes reading the guy's work an ambiguous thing at best. People wouldn't think less of Carver for having had to lean so heavily on an editor; they'd resent Lish for complicating the reading of the stories.

"In the meantime," he ended, "take good care of your archives."