Once upon a time, Sylvester Stallone made a lot of money for Hollywood by pretending to punch and shoot people, so one day he said to Hollywood, "Yo, I'm funny! How come you don't put me in any comedies?"

Hollywood shuffled its feet and avoided eye contact as much as possible, hoping he'd eventually go away, but of course it couldn't help thinking, "Does this guy not remember Rhinestone? I know I'm supposed to have a short memory, but it's not that short, for Christ's sake."

But Stallone wouldn't take no for an answer, so Hollywood cast him in Oscar, directed by John Landis (Animal House, The Blues Brothers, Coming to America), in 1991. It bombed, and Hollywood thought that would be the end of it, but Stallone, just like his most famous character, refused to stay down and accept his diagnosis of minor brain damage. 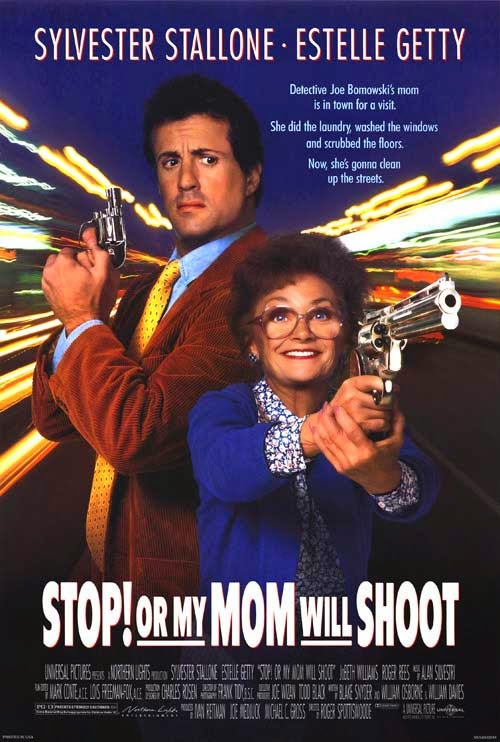 That's when Hollywood came up with a bulletproof idea: "Let's put Stallone in a comedy with one of The Golden Girls and call it Stop! Or My Mom Will Shoot. There's no way he'll want to do any more comedies after that!" Hollywood's sarcastic nephew had the nerve to say, "If you put Stallone in a movie with Bea Arthur, the audience might mistake him for the female love interest," but after Hollywood slipped him the number to Julia Roberts's car phone, he wasn't a problem anymore.

Luckily for Hollywood, Stop! Or My Mom Will Shoot was an even bigger bomb than Oscar, so Stallone went back to pretending to punch and shoot people, and all was well — until 2013, that is, when Stallone was invited to lunch by Robert De Niro, who told him, "I just got finished making a movie called Last Vegas that contains lots of jokes about men in their sixties taking Viagra, and since I stopped worrying about 'artistic standards' a long time ago, what do you think about costarring with me in a movie I call 'Rocky Vs. Raging Bull Vs. Even More Viagra Jokes'?"

Stallone said yes, Grudge Match was greenlit, and Hollywood was promptly fired by its nephew, who in 2005 legally changed his name to YouTube.