Soft rock. For many people it's a mellow, relaxing subgenre of pop music. But could it be harmful to your health? Morgan Fairlock has the story ...

Don't do drugs, especially the ones that have 500 different nicknames. 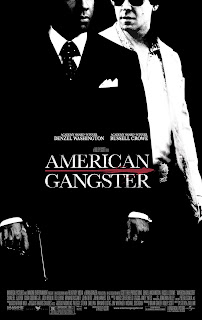 In March I saw Ridley Scott's American Gangster on DVD. It's an entertaining account of a true story, but I'd heard back in November, when it was released, that the film's ending leaves the impression that Frank Lucas, played by Denzel Washington, was essentially a good guy. I can't say I disagree with that impression.

Richie Roberts, the police detective who brought down Lucas and is played by Russell Crowe, practically pats Lucas on the back in the film's final moments for helping him bust crooked NYPD cops who were working with the Mafia to sell heroin on the streets of New York, but who were also getting in the way of Lucas's dominance of the market in Harlem. Lucas helped destroy hundreds, maybe thousands, of lives in Harlem in the early '70s with his highly potent brand of heroin, but he also ratted out some corrupt cops after he had no other options, and for that he should be commended, right? As if the moral repugnance of corrupt cops and drug dealers can be rated like movies, with the cops getting four stars compared to drug dealers' three and a half.

Washington played a dirty cop in Training Day (2001), and though he's brilliantly charismatic in that film, he's also scary as hell because his character, Alonzo Harris, fully believes in his illegal methods of catching the bad guys who don't have badges. I think Scott wants you to forget to a certain degree how much of a bad guy Lucas is, though I'm not saying I don't appreciate shades of gray in bad guys, particularly ones drawn from real life. I just don't think Lucas should've been let off the hook for one second.

In the final scene of American Gangster, as Lucas is leaving prison in 1991 after his second stint (he was sentenced to 70 years in 1976 but served only 5, then was sentenced to 7 more after a second conviction in 1984), Public Enemy's "Can't Truss It" plays in the background. I also recently saw Movin' On Up, a documentary on Curtis Mayfield in which Public Enemy frontman Chuck D talks about Mayfield's soundtrack to Superfly, a 1972 blaxploitation film centering on a heroin dealer who wants to go straight (he's glorified like Lucas is in American Gangster, only more so).

Chuck D says in Movin' On Up that while growing up in Harlem in the early '70s he saw firsthand the effects of heroin addiction on older family members. I doubt he'd think of Lucas as any kind of hero, anti- or otherwise, just as Mayfield was shocked when he saw Superfly for the first time and realized how far the film's message veered from the one he was trying to get across in his songs, including the title track, "Pusherman," "Freddie's Dead," and "No Thing on Me (Cocaine Song)." 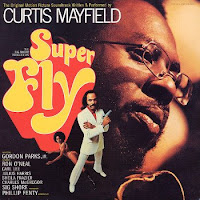 American Gangster is based on an article by Mark Jacobson called "The Return of Superfly." Published in New York magazine in 2000, it lists some of the different monikers for heroin that were common in Harlem almost 40 years ago:

Back in the early seventies, there were many "brands" of dope in Harlem. Tru Blu, Mean Machine, Could Be Fatal, Dick Down, Boody, Cooley High, Capone, Ding Dong, Fuck Me, Fuck You, Nice, Nice to Be Nice, Oh—Can't Get Enough of That Funky Stuff, Tragic Magic, Gerber, The Judge, 32, 32-20, O.D., Correct, Official Correct, Past Due, Payback, Revenge, Green Tape, Red Tape, Rush, Swear to God, PraisePraisePraise, KillKillKill, Killer 1, Killer 2, KKK, Good Pussy, Taster's Choice, Harlem Hijack, Joint, Insured for Life, and Insured for Death were only a few of the brand names rubber-stamped onto cellophane bags. But none sold like Frank Lucas's Blue Magic.
Posted at 11:25 AM No comments:

Indiana Jones: the grandfather to beat!

In the past couple of weeks I've seen many Indiana Jones and the Kingdom of the Crystal Skull product tie-ins at the grocery store—M&M's, Dr Pepper, Cheez-Its, and various Kellogg's cereals, including Indy's very own breakfast cereal. What I've noticed about the packaging for these products is that, for the most part, they feature images of Harrison Ford from 1981's Raiders of the Lost Ark and 1989's Indiana Jones and the Last Crusade, not Crystal Skull. 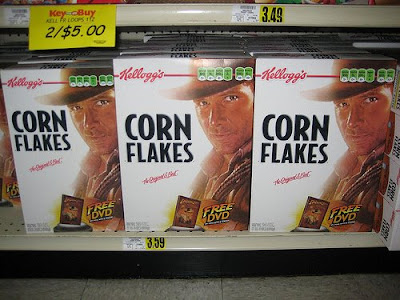 I don't doubt that Shia LaBeouf's character was written into the new film's screenplay to add youth appeal since Ford is now 65 years old, not 38 like he was when he filmed Raiders or 46 when he filmed Last Crusade, and Indiana Jones is in his 60s now as well. But this is Indiana freakin' Jones we're talking about, one of the most iconic characters in film history. His current visage can still sell corn flakes even if that visage is craggier than it used to be. And even if kids today weren't born until well after Last Crusade exited theaters 19 years ago, I'm pretty sure they've seen the first three Indy films on DVD, and I wouldn't be surprised if they're intrigued by the idea of a man their grandfather's age being a daredevil archaeologist. Show Indiana Jones as he really is, marketing gurus! None of us are getting any younger, including your sugar-swilling target demographic.

By the by, the new Batman movie, The Dark Knight, comes out in July. Back in the summer of '89, Tim Burton's Batman came out on June 23, almost one month after Indiana Jones and the Last Crusade was released. It's hard to believe it's been 19 years, but it's good to see both of these characters back on the big screen in the same summer.
Posted at 3:31 PM 2 comments:

Navy SEALs, a B movie from the summer of 1990 starring Charlie Sheen and reliable character actors like Bill Paxton, Dennis Haysbert, Michael Biehn, and S. Epatha Merkerson, was on AMC last night. For an action movie it's a pretty good comedy, but that's not meant as an insult to the cast or crew since Navy SEALs doesn't take itself too seriously. Maybe it's just a case of a movie that was injected with too much testosterone 18 years ago that now plays as a goofy love story between American jocks who kill Arab terrorists for a living.

The best scene I saw features the SEALs enjoying a day off from killing by going to a golf course and trying to hit each other with their carts and clubs while drinking lots of beer. They even find time to play a little golf.

But when Sheen notices his convertible being towed from the parking lot he jumps on a random bicycle and chases after the tow truck, eventually catching up to it and driving his car away, but not before dodging an oncoming 18-wheeler as he makes his escape.

Sheen lets out a triumphant "Yeah!" and looks completely fulfilled, as any red-blooded heterosexual male should be, once he's reunited with his vehicle. He's just risked life and limb to avoid paying a $100 towing charge for a car he'd illegally parked in the first place, and in the process he got to steal a kid's bike and leave it in a ditch on the side of the road.

Admit it—you'd be aroused too.

Below are some examples of overripe dialogue from Navy SEALs, courtesy of IMDB's "memorable quotes" page for the film. Remember, it came out in 1990, when the Schwarzenegger template of smug one-liners delivered in the general direction of freshly dead bad guys was the norm in Hollywood action movies.

Curran (Michael Biehn): This is starting to piss me off! Now cool out!
Hawkins (Charlie Sheen): Oh, I am cool, man. You should see me when I'm hot!

Pilot: Lieutenant, you guys are incredible. Thank you.
Curran: There's no reason to thank us because we don't exist. You never saw us. This never happened.
Hawkins: One more thing—you're welcome.

Hawkins: What's he saying?
Leary (Rick Rossovich): Something about your mother.
[Hawkins lowers his gun and slightly alters his aim, hitting the terrorist directly in the forehead with a well-aimed shot.]
Hawkins: Never talk about Mom.

[After Hawkins blows a door open with a shotgun ...]
Curran: What was that shit at the door?
Hawkins: Room service.

[Before throwing a grenade at propane tanks ...]
Hawkins: I hope these fuckers paid their gas bill. 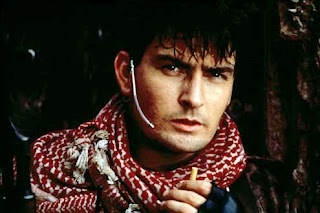 [On the way to Graham's (Dennis Haysbert) wedding, which is interrupted before it can even begin with news of an urgent mission ...]
Hawkins: I'm sorry, guys, but I cannot be a part of this funeral procession. I'm outta here.
[He jumps off the moving Jeep and the bridge it's crossing into the water 20 feet below while shouting—]
Hawkins: SEE YOU LATERRRRRRR!!!!

[Hawkins is posing in front of a mirror, gun drawn, when Curran walks in.]
Hawkins: I am so jacked up. I can feel it flowing through me, right through me.

Hawkins: You gotta stick it out there and not be afraid to get it cut off. That's what I always say. 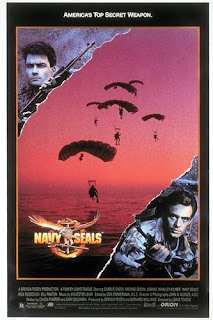 Curran: Brain grenade?
[He throws Hawkins a beer.]
Hawkins: What's the problem—still thinking about bad guys?
[Curran nods.]
Hawkins: We go in there, we hit 'em and forget 'em. That's what we do.

Curran: Why'd you leave the doorway? Were you looking for a rush? A little rush? Well, I hope you got it. Because you just toasted a man you put in his grave.

[Curran and Hawkins are arguing about Graham's death.]
Hawkins: Alright! I did it! I fucked up! I fucked up and he is gone! And there isn't a damn thing I can do about it, so what the hell do you want from me? Huh?!
[Curran walks away without answering.]
Posted at 2:35 PM No comments:

XTC's Andy Partridge on the demo version of "Holly Up on Poppy" (courtesy of the blog Timedoor and, presumably, the liner notes of Partridge's Fuzzy Warbles 3, which is why I'm leaving the punctuation intact):

"When [my daughter] Holly rode her rocking horse 'Poppy', she would say 'Daddy, I like its Poppy song'. That song was the low rhythmic rumble and high un-oiled squeak of its moving parts. I tried to capture that in this demo from 11th of May 1990. Of course I failed but isn't that the curse and motivation of all art? To bottle the unbottleable. I also have a rocking horse fixation, but you knew that." 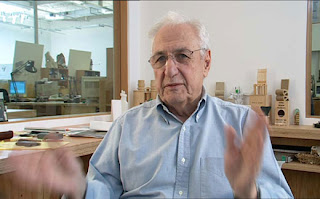 Gehry: "You know it is. I don't know what you do when you start, but I clean my desk, I make a lot of stupid appointments that I make sound important. Avoidance, delay, denial. I'm always scared that I'm not gonna know what to do. It's a terrifying moment. And then when I start I'm always amazed: 'So ... that wasn't so bad.'"
Posted at 1:06 PM 4 comments: