the art of comic stripping, then and now

The final installment of the 70-year-old comic strip Brenda Starr, created by Dale Messick, was published on January 2, 2011. Brenda said goodbye to her newspaper as many real-life newspapers have said goodbye to certain comic strips to save money and column inches.

Dick Tracy debuted in 1931, almost nine years before Brenda Starr, and is still in circulation today. In the following Sunday strip from the spring of 2011, writer Mike Curtis makes mention of computers, DVDs, and a high-tech weapon, but because the strip begins with advice for readers on how to safeguard their checkbooks, Dick Tracy still manages to seem out of touch with the current century. Then again, Tracy creator Chester Gould predicted the invention of the Apple Watch 70 years ago, while I've managed to predict and invent nothing over the course of 40. 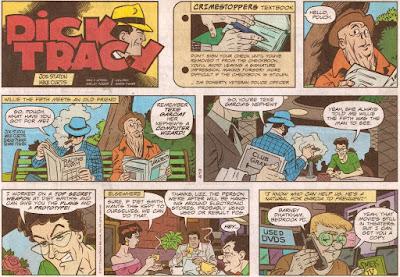 Brewster Rockit: Space Guy! was launched in 2004, making it a millennial compared to Starr and Tracy's Silent Generation seniors, but cartoonist Tim Rickard respects the history of his chosen medium. I like his supremely silly take on science fiction, especially in the 2013 strip below, and I don't mean that "ironically."

Brewster may be speaking another language for certain readers of the funny pages. Humor is subjective, after all. (To prove how hip I am I should point out that I've never had a problem with The Family Circus's "Kids say the darnedest things" brand of comedy.) For those readers who speak another language themselves, and if that language happens to be Spanish, please enjoy the following 2014 strip of Mark Tatulli's Lio and a rerun from 1967 of Charles M. Schulz's Peanuts, then take a few seconds to explain the jokes to me. 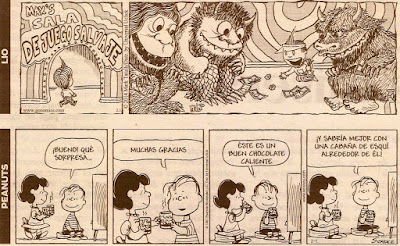