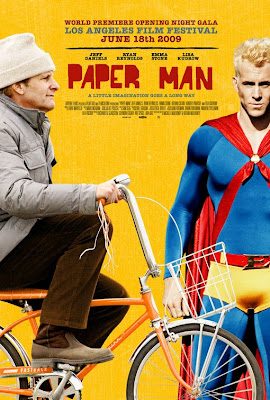 Ryan Reynolds's new movie, Paper Man, in which he plays Jeff Daniels's imaginary friend, a superhero named Captain Excellent, opens today. Last year Reynolds played the comic-book superhero Deadpool in X-Men Origins: Wolverine, and in 2011 he'll star as Green Lantern in a big-budget adaptation of the comic book of the same name. (Six years ago he costarred with Wesley Snipes and Jessica Biel in Blade: Trinity, his first foray into movies adapted from comic books.) Reynolds may also reprise his role as Deadpool in a spin-off of Wolverine, which itself is a spin-off of the first three X-Men movies.

Chris Evans's new movie, The Losers, also opens today. It's based on a comic book, albeit one in which the good guys don't possess superpowers, but Evans did play a man with telekinetic powers in last year's Push, which, at first glance, looked like another X-Men spin-off. He also starred as the Human Torch in Fantastic Four (2005) and Fantastic Four: Rise of the Silver Surfer (2007), and now he's set to play Captain America in a big-budget adaptation of the comic book of the same name. He'll also be playing Captain America in a big-budget adaptation of the "supergroup" comic book The Avengers.

Ryan Reynolds is married to Scarlett Johansson. She plays Black Widow, who's something of a superhero, in Iron Man 2, opening May 7, and she'll be in The Avengers with Evans and Robert Downey Jr., a.k.a. Iron Man.

With great power comes great responsibility, or so the Spider-Man movies reminded us again and again. And with great paychecks come great anxiety, I presume, about being a talented actor faced with the prospect of playing comic-book superheroes again and again for the rest of your career.
Posted at 11:14 AM No comments:

Occasionally the advertisements on the right-hand side of Facebook pages will catch my eye because of the small pictures that are used:

The caricature of Paul McCartney on the right is a thousand times more flattering than the photograph on the left. The paparazzo who's responsible must be a John fan. (Typical.)

"He's got the whole hospital nursery in His hands ..." (I just hope God realizes those aren't peanuts.)

This image was attached to an ad about new fathers earning money from home, I believe. Never tell a man what he can't do, even if the activity in question is breast feeding.
Posted at 10:10 PM No comments:

soul of the son

I first heard D.J. Rogers Jr.'s "Lonely Girl" in June 2002 while waiting for The Sum of All Fears to begin at a movie theater in Hendersonville, North Carolina. It was part of the piped-in music provided by United Artists Cinemas, and Rogers was identified as the "hot new artist" behind the song after it played. I was immediately struck by "Lonely Girl's" smooth hooks, and I still think it's one of the best songs of the past decade.

Unfortunately, the album that housed the song, Emosoul, the title of which seemed to piggyback off the "emo" subgenre of pop-rock that was popular at the time via groups like Dashboard Confessional and Jimmy Eat World, was barely released at the end of '02. In fact I'm not sure if anything more than promotional copies were pressed by Rogers's label, Motown.

"Lonely Girl" should've been a hit. And because I liked it so much I ended up asking for a greatest-hits compilation by Rogers's dad, an R&B-gospel singer who was popular in the late '70s and early '80s, for Christmas in 2005. I wasn't disappointed: Golden Classics is well worth a listen.