Last week as I read obituaries for singer Alex Chilton, who died on March 17 at the age of 59, reportedly from a heart attack, I realized he had a few things in common with Michael Jackson.

Chilton didn't end up becoming the biggest star in the world—he was a fairly obscure artist compared to Jackson—but he did have a #1 hit on the Billboard Top 40 at the age of 16 as the lead singer of the Box Tops. "The Letter," which hit the top of the charts in 1967, was the Box Tops' first single, just as "I Want You Back" was the Jackson 5's first single two years later, when frontman Michael Jackson was only 11 years old.

Listeners couldn't believe "The Letter" was sung by a tenth grader when they first heard it; Chilton's gruff vocals sounded like they were coming from a much older (and some would say blacker) set of pipes. Similarly, Jackson was noted for sounding mature beyond his years when he sang hits like "ABC" and "The Love You Save," and when he died last June many writers observed that he spent his childhood being the breadwinner of the family only to spend his adult years acting like a child.

One of the tributes to Chilton that I read on the Internet mentioned that he had covered Jackson's "Rock With You" in concert in recent years. In a video shot in Haiden, Austria, in August 2008, the month Jackson turned 50, Chilton introduces the 1979 smash hit by saying, "I honestly love this tune. Nobody else even realizes it's good yet, but I swear to God this is a great song. He didn't write it, but ... that's probably why it's great."

Okay, so Chilton wasn't a fan of Jackson's songwriting, but Rod Temperton, the Englishman who penned "Rock With You," deserves all the praise he gets. "Rock With You," like Chilton and Jackson, is an enduring classic.

a movie poster that could've spent less time explaining itself

Welcome back to my infrequent series (some would call it "abandoned" or "not substantial enough to even qualify as a series," but let's not nitpick) in which I play Monday-morning quarterback for movie-studio marketing departments and therefore justify my existence in this universe.
Diary of a Wimpy Kid, adapted from the book series of the same name, opens today, and recently I've seen posters on the sides of buses that feature this tag line:
"IT'S NOT A DIARY, IT'S A MOVIE."
Of course it's not a diary! How stupid do you think I am, Hollywood? Nobody advertises their diaries in public. Duh!

But even if they do, they're called blogs. Or Facebook status updates. Or tweets. And they help justify our existence by letting everyone else in the universe know what we think of, you know, stuff, or how bored we are or how fat we think we are (which is the cue for the rest of the universe to say "OMG, you are so not fat!").

You could learn a lot from people like me, Hollywood. In fact, yesterday when I was trying on some new jeans that felt a little tight and I decided Levi's has really taken a nosedive in popularity, I thought, "This would so make a great movie!"
Posted at 1:19 PM No comments:

Trash can be just as inspiring as art.

Thomas Mars and Laurent Brancowitz of the French band Phoenix were asked about their influences by Melena Ryzik for the March 7 installment of The New York Times's Playlist feature. Here are two excerpts: 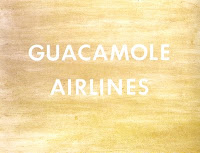 Ryzik: On your list you also put a painting, "Guacamole Airlines" by Ed Ruscha.
Mars: He's just the coolest artist alive. Whenever you hear him talk about art, his approach to it is very contemporary, it's very pop, and that's something we've always wanted to do. That's why I put Us Weekly in there [too]. Why you want to create music can be because you hear something beautiful, and you're thinking, I could be inspired by this. But sometimes you see something disgusting, and you think, O.K., I have to make something better than this.

Ryzik: How do you hold on to ["teenage abandon," as Brancowitz calls the recurring theme in Phoenix's music] as adults?
Brancowitz: It's not hard. I mean, it's not related to age—I say teenage because it's something you experience with the most force when you are young. You know this emotion you have when you see a movie that's so beautiful or you hear a piece of music that sounds perfect? It's this kind of anxiety and joy. So it's very easy, actually. You just have to see the right piece of art.
Posted at 8:03 AM No comments:

Everyone needs a theme song.

Plenty of songs are named after women, but men have needs too.

Thanks for finding this one, Sini!
Posted at 9:09 PM 3 comments: