Last July Chicago's 101.1 FM switched to an all-news format after 19 years as the alternative-rock-friendly Q101. The smooth-jazz station at the far left end of the dial, 87.7 FM, was replaced with Q101's old format, and now, a little less than a year later, 101.1 is experiencing a new identity crisis: as of this morning "adult hits" is its new niche. Kid Rock's "Cowboy" is on right now, and I just heard Lenny Kravitz's "American Woman," Christina Aguilera's "What a Girl Wants," and OMC's "How Bizarre." If you can remember hearing those songs on the radio in 1999, that apparently means you're an adult now.

Two Saturdays ago I helped some teenagers at the local library create a display of apocalypse-themed books, movies, and graphic novels. One girl, Sarah, was trying to come up with a playlist of end-of-the-world songs, so I suggested Prince's "1999." 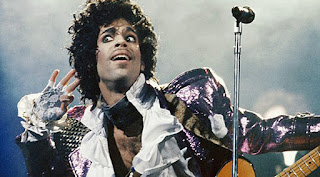 No one in the room had heard of it. Following an awkward pause, Sarah said, "I was born in 1999."

When Prince sings, "Two thousand zero zero, party over, oops, out of time," I know exactly what he means even if he didn't when he wrote the song—he was still in his early 20s back then. But if you were born long before 1999, I think you know what I'm talking about.

In conclusion, gimme back my smooth-jazz station, dammit. Even if it mostly played urban adult contemporary, not smooth jazz, its version of "adult hits" was preferable to 101.1 FM's.
Posted at 10:32 AM No comments: