In April 2009, halfway through the first season of Starz's short-lived but fondly remembered Party Down, an episode aired in which waiter and "retired" actor Henry Pollard (Adam Scott) runs into Michael (Breckin Meyer), an old friend from acting class who's now an up-and-coming movie star. Michael has been signed to play Edgar Allan Poe in a big-budget film that imagines the 19th-century author as a vampire hunter. And since there's plenty of bloodsucker butt to kick, Poe has a sidekick, young Abraham Lincoln, a part for which Michael thinks Henry would be perfect.

However, Henry can't even manage to land an audition with the film's foul-mouthed producer (J.K. Simmons, equally funny and terrifying), and in the second and final season of Party Down we discover that Channing Tatum ended up getting the part.

Seth Grahame-Smith's novel Abraham Lincoln: Vampire Hunter was published in March 2010, the month before Party Down imagined Tatum as a Nosferatu-killing Great Emancipator. I have no idea who first came up with the idea of our 16th president moonlighting as Van Helsing, or if it even matters, but in that 2009 episode of Party Down Breckin Meyer sounds like he's imitating Matthew McConaughey's laid-back Texan twang. Well, guess who's costarring with Channing Tatum in Steven Soderbergh's male-stripper comedy, Magic Mike, opening this Friday? Alright alright alright ...

Benjamin Walker, who previously played our nation's seventh president in the Broadway musical Bloody Bloody Andrew Jackson, takes on the lead role in Twentieth Century Fox's big-screen adaptation of Abraham Lincoln: Vampire Hunter, which opened last Friday to a mixed reception from both critics and audiences. I bet Henry Pollard wouldn't have landed an audition for that film either, but at least Adam Scott will get to wear a Lincoln-like beard in Fox's The Secret Life of Walter Mitty, directed by and starring Ben Stiller and set for release in December 2013. (For what it's worth, John Cusack played a serial-killer-hunting Edgar Allan Poe earlier this year in The Raven.) 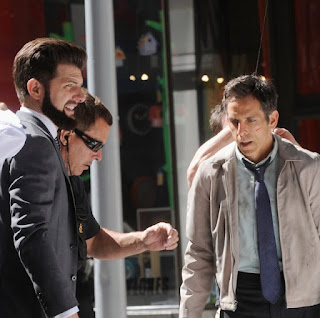 If the Lincoln movie left you cold* but you're still in the mood for a 3-D hunt of imaginary creatures, Jeremy Renner and Gemma Arterton star in Hansel and Gretel: Witch Hunters, hitting theaters next January. And if you're the kind of person who thinks President Obama is a socialist, please call off your witch hunt and hibernate until March 2014. That's when Disney will release Maleficent, a remake of Sleeping Beauty starring Angelina Jolie and produced by Joe Roth, who's already given us the Tim Burton-directed Alice in Wonderland remake and Snow White and the Huntsman, plus he has Sam Raimi's Oz: The Great and Powerful waiting in the wings for a March 2013 release.

Fairy-tale movies are the new superhero movies. Except Hollywood is still making superhero movies. Once upon a time Hollywood made other kinds of movies, but then an evil financial wizard conjured up a recession that helped kill the home video market, making millions of dollars in yearly revenue vanish into thin air and forcing Hollywood to concentrate its remaining production capital on 3-D gimmickry and "presold" stories and characters that audiences already know and love.

But, in all honesty, if an evil wizard were to take away the powers of speech and texting from moviegoers once they've paid for their tickets and taken their seats, I probably wouldn't care so much about what kinds of movies Hollywood makes. Where are you when we need you most, Voldemort?