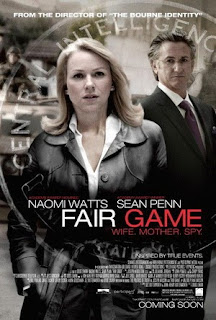 Fair Game, the fact-based thriller that opened last month, is based on Valerie Plame's 2007 memoir Fair Game: My Life as a Spy, My Betrayal by the White House. Directed by Doug Liman (The Bourne Identity, Mr. & Mrs. Smith), the film stars Naomi Watts as Plame and Sean Penn as her husband, diplomat Joseph Wilson.

This Fair Game is not to be confused with 1995's Fair Game, an action movie starring William Baldwin and Cindy Crawford that's based on the assumption that supermodels can act. Actually, Fair Game is adapted from the novel of the same name by Paula Gosling, but it was first adapted for the big screen nine years earlier as Cobra, starring Sylvester Stallone as supercop Marion "Cobra" Cobretti and his then-wife, Brigitte Nielsen, as a government witness he must protect from the bad guys. Say what you will about Nielsen as an actress, but in Cobra she does a great job pretending she isn't half a foot taller than her husband. 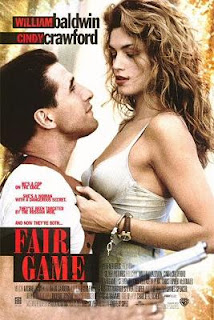 Nineteen eighty-six also saw the release of an Australian action film titled Fair Game, but its protagonist, according to Wikipedia, is "a young woman ... who runs a wildlife sanctuary in the Outback [and] is menaced by three kangaroo hunters who have entered the sanctuary looking for new game." (Remember, the late Steve Irwin was a crocodile hunter, so he wasn't a suspect in this case.) In the documentary Not Quite Hollywood: The Wild, Untold Story of Ozploitation! (2008), an entertaining, affectionate look at Australian B-movies of the '70s and '80s, movie buff Quentin Tarantino discusses a scene in which the heroine is stripped to her waist and forced to be a hood ornament on the hunters' truck. "If you like outrageous cinema," the director of Inglourious Basterds says, "you live and breathe to wait for those weird moments that happen every once in a while in genre cinema, where it's like you can't believe you're seeing what you're seeing."

The heroine of Fair Game is played by Cassandra Delaney, not Naomi Watts, whose family moved to Australia when she was 14, but since I need a good complete-circle ending for this blog entry, let's just say it was her. As Watts's latest film makes clear, the truth is fair game, right?
Posted at 7:25 PM