authors and other fools 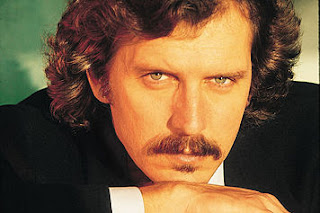 Before his recording career took off in 1976 with The Art of Tea (one of my favorite albums), jazz-pop singer-songwriter Michael Franks composed scores for the films Cry for Me, Billy ('72), Zandy's Bride ('74), and the Roger Corman-produced cult classic Cockfighter ('74). It wasn't until 1982, however, that he lent his voice to a movie theme song: "Coming Home to You," from the Al Pacino vehicle Author! Author!

The song's music was written by Dave Grusin, with lyrics by Alan and Marilyn Bergman, the husband-and-wife team who penned the lyrics for "The Way We Were" ('73) and "The Windmills of Your Mind" (from The Thomas Crown Affair, '68), both of which won the Academy Award for Best Original Song. (Grusin and the Bergmans had previously collaborated on the theme songs for Maude and Good Times, among other TV series.) The Bergmans also wrote the lyrics for the following 1982 Best Original Song nominees: "It Might Be You" (music by Grusin once again), from Sydney Pollack's Tootsie; "How Do You Keep the Music Playing?" (Michel Legrand, music), from Norman Jewison's Best Friends; and "If We Were in Love" (John Williams, music), from Yes, Giorgio, starring Luciano Pavarotti.

Three nominations for three different songs. They had good odds, but the Bergmans ended up losing to "Up Where We Belong"—music by Jack Nitzsche and Buffy Sainte-Marie, lyrics by Will Jennings—from the Richard Gere-Debra Winger drama An Officer and a Gentleman. (The fifth nominee was Rocky III's "Eye of the Tiger," written by Survivor's Jim Peterik and Frankie Sullivan III.)

"Coming Home to You" obviously wasn't on the Oscar short list that year. That's because it's not a good song. In fact it's often cringeworthy.

In 2007 a blogger at Cinefile Video wrote, "Upon listening to this song, you get the distinct impression that Mr. Franks had never uttered a note in his life before stepping in front of the mic to record it, for it is just a wretched, wretched performance."

It's certainly not his best, but he's a hired hand in this scenario working in a strictly pop vein, and having exclusively sung his own lyrics up to that point in his career, he may have felt off balance trying to breathe life into the Bergmans' words, which aren't their best either: "Whenever there are days / It feels as though the world / Is coming to an end / We close the door behind us / Where it's always milk and cookies / And a friend." But the biggest crime here is committed by Grusin, who unabashedly lifts the keyboard riff from the Doobie Brothers' "What a Fool Believes" ('78). (He also steals from his arrangement for "It Might Be You," or maybe it's the other way around—Author! Author! was released six months before Tootsie.)

Grusin wasn't the only one ripping off Michael McDonald and Kenny Loggins's Grammy-winning composition in those days. In 1980 Robbie Dupree somehow avoided a lawsuit with "Steal Away"—is it because he secretly is Loggins?—while the keyboard riff was put to more subtle use in the Pointer Sisters' "He's So Shy" later that year (the same can't be said for Tom Monroe's 1981 cover of Petula Clark's "Downtown").

Maybe Grusin was simply burned out after scoring both On Golden Pond and Absence of Malice as well as portions of Reds in 1981. In addition to scoring Tootsie and Author! Author! (he was brought in after the film's original composer, Johnny Mandel, was fired) in '82, Grusin composed the theme song for TV's St. Elsewhere and released a jazz album titled Out of the Shadows. You could say his plate was full at the start of the Reagan years, so he can be forgiven for stealing from the Michael McDonald playbook.

That's what this fool believes, anyway.
Posted at 4:45 PM