A recent New York magazine article centering on Brian Williams's six-month suspension from NBC News for "embellishing" the truth of a story he reported on during the Iraq war in 2003—CHECK THE TAPE, BRIAN! THAT'S WHAT YOUR NETWORK'S NEWS ARCHIVES ARE FOR!—contains one particularly eye-opening paragraph: 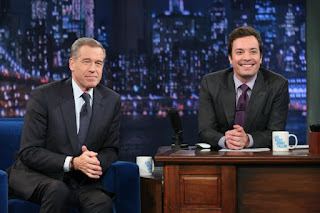 A few years ago, Williams told [NBCUniversal president and CEO Steve] Burke he wanted to take over the Tonight Show from Jay Leno. Burke dismissed the idea and instead offered Williams a weekly prime-time program called Rock Center. Williams hoped it might develop into a variety show. But Rock Center ended up more like a softer 60 Minutes, and it was canceled after two middling seasons. Undeterred, Williams pitched CBS CEO Les Moonves about succeeding David Letterman, according to a high-level source, but Moonves wasn't interested. (CBS declined to comment.)

Therefore, when Williams appeared as "himself" on a fourth-season episode of NBC's 30 Rock in November 2009 and auditioned to be a new cast member of the show-within-a-show, "TGS With Tracy Jordan," there was more truth and less embellishment in that piece of comedy than originally suspected. Below is a clip from the "Audition Day" episode, before Williams actually tries out on the "TGS" set:


It takes more than a dry wit to be a good actor and not just a good guest on late-night talk shows, so don't quit your day job just yet, Mr. Will—

(While doing some spring cleaning and recycling old VHS tapes this week, I ran across a clip of Williams, from September 2005, talking about his experience in New Orleans covering Hurricane Katrina. When the hurricane made landfall and reached the Superdome, where Williams was stationed, he compared the sound of its arrival to that of a New York subway train. But you know what? I bet it sounded more like a Chicago elevated train.)
Posted at 4:35 PM