shortcut to movie limbo (or scenic route to movie oblivion?) 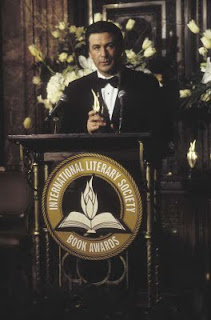 "I'd be a great film critic," Alec Baldwin says in the June 24-26 edition of USA Weekend, as part of a two-question interview (pace yourself, you hardworking Sunday supplement!) promoting his role as host of the Turner Classic Movies series The Essentials. "Most film critics make a huge mistake. The movie business is a director's medium. The actors actually have the least amount of responsibility for the film. It's really incumbent on critics to understand who is responsible for what's on screen."

It's true that film actors are generally at the mercy of their directors, not to mention the editors who shape performances in postproduction and sometimes discard them entirely on the cutting-room floor. But it sounds like Baldwin may still be irked that his career as a leading man went south in the '90s along with critics' opinions of box-office failures like The Marrying Man (1991), The Shadow (1994), and Ghosts of Mississippi (1996).

Baldwin started to gain weight around the time of 1997's The Edge, meaning he quickly transitioned from money-losing leading man to the more financially secure status of "character actor" (the talented Russell Crowe, whose metabolism seemed to give up on him after 2008's Body of Lies, appears to be entering this career phase himself, having been cast in a supporting role as Marlon Brando—I mean, Superman's biological dad—in the upcoming Man of Steel). It suits him well—Baldwin had great comic timing even before he entered John Belushi's weight class, having hosted Saturday Night Live 15 times since 1990, but it's certainly helped him pay the bills the past five years—and win a couple Emmys—as Tina Fey's boss on 30 Rock. He's the best thing about that show.

(The actor discussed his time near the top of the Hollywood food chain in a New Yorker profile three years ago. "In Hollywood, the success of [1990's 'The Hunt for Red October'] earned him 'an all-access pass that lasts for five years,' Baldwin recently said. 'You have to capitalize. And, if the movies you make don’t make money in that period, your pass expires.'" I'd never seen a former A-list leading man be that honest about his career before. It made me respect Baldwin even more.)

In 2001, after his big-ticket starring roles had dried up, Baldwin put his money where his mouth is and directed a film based on an old perennial of high school English classes, Stephen Vincent Benet's short story "The Devil and Daniel Webster." It starred Anthony Hopkins as Webster, who defends Baldwin's protagonist in supernatural court against the Devil (Jennifer Love Hewitt, an intriguing choice at the very least) after the struggling writer sells his soul to her and then decides he wants it back. 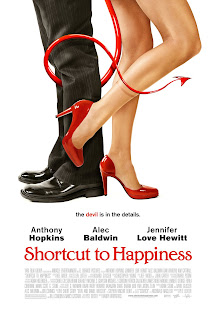 Sounds somewhat promising, but the film languished in postproduction limbo, appropriately enough, for more than five years after its funding dried up—Baldwin told reporters in 2004 that his investors' checks bounced while the film was being shot—leaving "The Devil and Daniel Webster" unfinished and potential distributors wary of picking up the tab.

Yari Film Group finally bought the film in 2007 and released it that July as Shortcut to Happiness. As proof of how many different hands the movie passed through on its way to (a handful of) theaters, 19 (!) producers are listed on the film's poster, including Baldwin, who chose to use the pseudonym "Harry Kirkpatrick" for his director's credit, having washed his own hands of the project.

So the next time you think Alec Baldwin has phoned in a performance, remember, it's not his fault. Blame it on the Devil if you have to, but even then keep in mind that it wasn't the Devil's idea to cast Jennifer Love Hewitt.